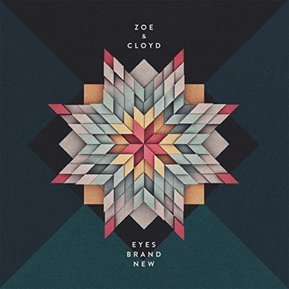 Zoe and Cloyd will be a new name to many people with this being only their second album as 'Zoe and Cloyd' but they are a couple who are absolutely steeped in the old and new music of Appalachia and are experienced musicians who were founder members of the much vaunted trio 'Red June.' The couple consists of Natalya Zoe Weinstein whose prowess in a variety of fiddling styles is well known as is her vocal and songwriting abilities and John Cloyd Miller who is a multi instrumentalist, talented vocalist and award winning songwriter, pretty much a match made in heaven!
'Eyes brand new' is much more of a band album than their 2015 debut 'Equinox,' with Kevin Kehrberg helping out on bass, Will Straughan of 'Red June' playing dobro and Jens Kruger of the Kruger Brothers on banjo. The sound always has a lovely sparse feel and the vocals are sublime, in some ways reminding me of a very much more rootsy version of 'Everything but the girl.' A strange comparison maybe but whatever else those 1980s British hit makers lacked or indeed had, they certainly weren't found wanting in  the vocals department!
This is an album that is rooted in a mellow folksy genre that whilst having a modern feel has a natural depth that is immersed in the high lonesome music of Appalachia, with some excellent songs and beautiful, often mellow, harmonies. Despite the usually mellow beauty there is always an 'edginess' that keeps the recording a million miles from some of the 'bland' music that often passes for folk, with the subtle changes in the vocal mix, varied tempo's, albeit never getting above a fairly sedate mid tempo, and the varied blending of the instrumentation always keeping things interesting, often with an otherworldly haunting atmosphere.
The album opens with the acoustic guitar on the title track Eyes brand new, soon joined by Zoe's lovely vocal with Cloyd coming in on harmonies with the banjo and bass  adding to the mix as the composition takes on a fuller sound on a gorgeous, mellow, harmony driven song. Cloyds unaccompanied vocal gets Jewel of the Caspian sea underway on a folksy tale that gradually takes on a powerful Appalachian feel, with what sounds like a muted cello deep in the background creating a slightly spooky atmosphere. The song gradually builds and changes entirely to an up tempo upbeat song with banjo, fiddle and bass joining the mix and Zoe providing harmonies on the chorus of a both unusual and tremendous song. There are even two hugely atmospheric instrumentals in the shape of Frontier waltz and Underground Railway, the latter with the banjo and fiddle working alongside each other creating an incredibly eerie feel. We're introduced to Fast air via a guitar and bass intro, soon joined by Cloyds lead vocal and fiddle with dobro not far behind and Zoe adding gorgeous harmonies on the chorus and soloing on one verse of yet another excellent song. Finally, Let's all go down to the river is a speedy mid tempo 'bluegrass gospel' song with bass, fiddle and banjo driving the song on with Cloyd on lead vocal and Zoe's beautiful harmonies.
Everything about this album is excellent. On occasions the songwriting has an old time feel, at others is very much of the 21st century, the playing is highly skilled and the tempos and arrangements highly varied, but above all it is the excellence of the vocals and those sublime harmonies that stick in the mind. Maybe that is a little unfair bearing in mind the overall quality of everything else but give this excellent album a listen and you will hear exactly what I mean.