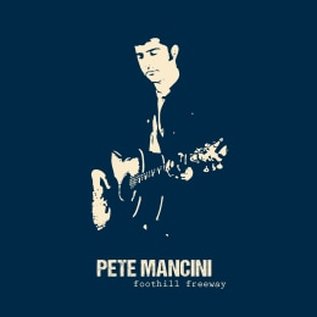 This tremendous recording is the solo debut from front man and main songwriter of the hugely talented 'Butchers Blind,' a band who are two superb full albums and one e.p into a really blossoming career.
'Foothill Freeway' contains ten tremendous songs by a singer songwriter who is at the very peak of his powers and who should really be spoken of in the same way as Farrar, Tweedy, Adams were in their early days of worldwide acclaim, with his excellent songwriting and a vocal style that is able to emote some epic stories. I actually described his voice in one Butchers Blind review as being similar to Don Henley, a feeling that still persists but perhaps not as persistently as it once did! Whilst there are still elements of Henley, a friend commented that at times he sounded like Roger McGuinn, at others a little like Tom Petty but whoever we compare him to, he very much retains his own individuality and style. It is a style that sits him with relative comfort in several country sub genres such as country rock, a little alt. country and perhaps an occasional, but less pronounced, folksiness, with all blending and flowing so beautifully into each other that I don't know why or how I'm labeling them! It is quite unusual for a ten song album to not contain one single weak link, or perhaps a couple that can be regarded as filler, but that is the case with this quite addictive recording, with every song being beautifully written, arranged and performed.
Pete has one of those voices that has a natural air of soulful drama and melodicism which when added to his song writing mastery and ability to write 'ear worm' melodies makes it difficult to see him failing. Acknowledgement of his talent comes by way of the incredible lineup of talented people who helped out on this album.  As well as members of Butchers Blind there is Iain Matthews of Fairport Convention and Plainsong, Buddy Woodward of the Dixie Bee Liners, Russ Seeger from the Last Hombres, Jonathan Preddice of Miles to Dayton, plus Cassandra House (another star in the making!), Travis McKeveny and Skip Krevens.
Sweethearts of the Rodeo provides an evocative and easy rolling start to the album with banjo mandolin, melodic guitar, steel guitar, bass and percussion, soon joined by Pete's excellent lead vocal that on this song sounds a little like a young Roger McGuinn. It is a tremendous, hook laden country rocker that is almost a flashback to the early days of the genre. A lovely mellow fiddle, steel guitar with the bass and percussion propel You're gonna change on an absolutely tremendous and fairly sparse country rocker with some excellent harmonies on a song that in many ways is a throwback to the late 60s and early 70s. High wind slick roads starts with a strong folksy feel then blossoms into as gorgeous a country rock duet as I have ever heard, with the beautiful vocals of Cassandra House blending perfectly with Pete's. They are supported by the weeping steel guitar on a song that is far  more than just an echo of Gram and Emmylou, at the very least matching and probably surpassing everyone else who has been compared to that classic 'country rock' duo. The album's title track Foothill Freeway has a sparse, gentle start with just acoustic guitar and Pete's evocative vocal eventually joined by a lovely reflective fiddle sound that almost has a Celtic folk feel on this beautiful sad story song. As we progress through the song the story's mournful sadness is beautifully portrayed vocally with a quite intense depth of feeling as well as by the arrangement of the dramatically sparse instrumentation. Finally, there is more variety with Rented room being led by a haunting piano with an eerie sounding vocal from Pete joined by a ghostly cello and eventually the violin on a song that has a slightly unearthly atmosphere.
This is an album that I've been playing over and over again without ever tiring of it  thanks to Pete Mancini's  warm, incredibly evocative vocals, his excellent songs and the strong and varied textures that, certainly to my ears, make this one of the outstanding albums of the year so far.  The ambience of the recording is such that the variations flow beautifully, are multi textured and include melodies that are memorable, whilst on the more dramatic tales the sense of drama is intense and palpable. There is little if any more that any discerning music fan could or should wish for!