WOOKALILY – ALL THE WAITING WHILE 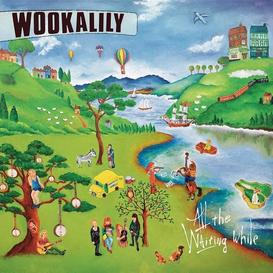 This album has just about the most spectacularly colourful cover I think I have ever seen, something that is completely appropriate thanks to the fact that the same is true of the albums contents which include some of the most gorgeous, emotion tugging vocals, arrangements and stories you will hear anywhere. Wookalily are predominately a four piece band made up of four hugely talented young Northern Irish women who are as comfortable in American ‘folk music’ as they are in traditional Irish folk music, a strain of which thanks to the immigrants eventually developed into and added to ‘traditional country music!’ Quite a stretch in time and scope but listen to this stunning album and you will hear exactly what I mean with all of the various aspects and offshoots in and around these two loose generic fields being included in a completely natural way with no unnecessary contrivances.

The core of the band consists of Adele Ingram on guitar, banjo, mandolin and backing vocals, Louise Potter, drums, percussion and backing vocals, Lyndsay Crothers is the predominant  lead vocalist as well as playing guitar, electric bass, percussion and djembe and Sharon Morgan plays lead guitar, banjo, mandolin and double bass. I’m not sure how it was worked out but singing lead on one song each were core band member Adele Ingram, plus Nina Armstrong, Elaine McConnaghie, Rowena Cairns and Catherine Grehan, none of whom are mentioned in the band line up but all certainly adding to the beauty of this gorgeous album. There are other ‘extra’ musicians as well, which is a bit deceiving because the arrangements are never overdone and there is a lovely flow to the album albeit with a series of songs that are diverse vocally, thematically and stylistically.

Of the song writing all, with the exception of Tom Watson’s Fire Below were either solely or in three cases co writes by Adele Ingram. There is an overall edginess to the album despite the beauty of the melodies that lifts this band far above most of their peers.  Many  albums that are generically similar in so far as being built on gorgeous melodies and beautiful vocals sound sugary and sanitised, but thanks to the arrangements and the supreme vocal qualities there is never any danger  of Wookalily descending into the commercial soup. That is not to say their music is not commercial although I don’t suppose the album will sell as well as those of manufactured ‘pop stars.’

The arrangements are tremendous and cater to the needs of each song and vocalist but remarkably without ever upsetting the flow of the album as a whole despite the stylistic differences of each vocalist and song. There are a number of songs that even after just one or two plays give the listener the impression they have heard them before. This is due to the strength of those memorable melodies that have such warmth and appeal.

The album begins with Hands pass in time, with chiming dobro, banjo and guitar starting this haunting otherworldly song before Lyndsey Crothers beautiful, character laden vocal kicks in and gradually draws this eerie song into a slightly more sinister sound. A tremendous opener that is full of drama and promise for this album that is more than fulfilled. Nina Ingrams sultry vocal dominates See me for you, a melodic tale of someone trying to break to a lover that the universe doesn’t revolve around him. There is excellent instrumentation and a quirky arrangement on a song that is as much folk as country and includes some lovely restrained electric guitar playing from Sharon Morgan. Don't speak of the devil is a much more countrified song led by banjo and another different vocalist but with no less talent than the previous two, Elaine McConaghie. Again there is a quite hauntingly eerie atmosphere at times on this dark murder ballad.  There is more excellent banjo on Memories of New Orleans,  a song that starts with a sparse arrangement before taking off with the sound filled out by bass and percussion and Lyndsay Crothers sparky lead vocal on an atmospheric, slightly sinister tale that evokes the scary voodoo of New Orleans. Banjo Blues is a song that is part barrelhouse boogie and part vaudeville, something that really shouldn’t work but thanks to the talents on show it does adding even more variety to a tremendous album. Finally, Johnny kicked the bucket is a dramatic ‘gypsy jazz’ (or close it) song that again, despite the generic stretch does nothing to interrupt the flow of the album, merely expressing the musical quality contained within this tremendous band.

On repeated listening it becomes obvious that thanks to the gorgeous melodies, beautiful vocals, excellent arrangements, skilled playing and the high quality of the songwriting  this band are genuinely something very special. It will be interesting to see if they can maintain this quality, and who knows, because of some catchy melodies they could even cross over to the edge of the mainstream! That would be quite something for a modern day band that I like so much, although if ever an album had something for everyone it is this one.