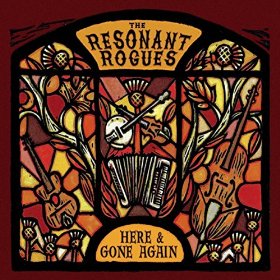 The Resonant Rogues hail from Asheville, NC an area that, to me at least, seems to have been a breeding ground for various esoteric forms of American music. Since before the early days of recording the city and surrounding area have been known for street musicians, many unafraid to experiment with musical styles, and has also been a hotbed of the rural Appalachian music since the first settlers.
Two six song e.ps preceded this tremendous album of eleven songs that in varying degrees are very rooted in the Balkans, in fact the roots of most songs are probably in that area from whence, arguably, gypsy jazz sprung, a style that is often not dissimilar to the Resonant Rogues. Conversely, there is also a powerful American feel to the songs, no doubt   because of the vocals and indeed the lyrics, in fact where the accordion doesn't dominate there is a powerful rural blues and hillbilly feel. That little lot should be enough to convince anyone that this not your average 'roots music' band, with their sound and style being pretty much unique. As you start to get a handle on the songs and think a style is forming it meanders off in another hugely appealing direction, on songs that have a fullness, depth and power irrespective of lyrics.
The band was originally formed by Keith Smith who plays guitar, vocals, suitcase and percussion with Sparrow on accordion, banjo and vocals, but they soon enlisted Craig Sandberg on upright bass and vocals and Drayton Aldridge on fiddle and vocals, with Smith and Sparrow writing all of these extraordinary songs between them. Sparrow has immersed herself in music and dance that knows no geographical boundaries; as well as the Resonant Rogues playing with a Balkan dance band, a tango orchestra and singing with a jazz band plus she is a solo performer with one solo album to her credit. Keith Smith's background is a total contrast, probably best summed up as an itinerant percussionist who turned to guitar and songwriting, finishing up with Sparrow as the Resonant Rogues! No wonder then that their musical sound has roots spreading in many different directions. Much of their stylistic variations are due to Sparrows skill on the accordion and  Drayton Aldridge's astounding ability to fiddle in an eastern European or jazzy style and then to suddenly change to best 'hillbilly' mode.
The album begins with Make Us Stay a song that has an edgy country feel, with Keith Smith's evocative lead vocal and lovely harmonies from Sparrow, gorgeous steel guitar, atmospheric fiddle and a sound that seems to vary, at times having a 'western swing' feel, at others hard country, country rock and more.  It is a terrific song but one that, apart from the consistent high quality, ill prepares the listener for much of what is to follow! Next up is Weight Of This World, a song that has a lovely flexible jazzy lead vocal from Sparrow with the accordion and fiddle combination giving, on occasions, a swampy New Orleans feel, at others a gypsy jazz sensibility, with nice acoustic guitar and fiddle solos. It is a strange unusual song that will get most listeners realizing this is not a straight forward, albeit edgy, country album. Weary Head has a nice banjo start, with Sparrows folksy vocal, on an incredibly powerful tale, with accordion, fiddle and percussion deepening the strange slightly spooky atmosphere.  There is a slight impression that this could be a country song, perhaps due to the banjo, and yet the overwhelming sensation is that it is rooted in European gypsy jazz. Flowers is a tremendous song that provides a complete contrast, with a lovely banjo and fiddle joining together with Sparrows lead vocal on a song that has a powerful old 'hillbilly' presence with no eastern European leanings at all, unless of course, the listener can accept that some of those old 'hillbillies' originated in eastern Europe! Finally, Tomorrow has a nice start with the banjo and guitar soon joined by Sparrows vocal and lovely slow moody fiddle and steel guitar on a song that has a powerful country feel. It is tempting to say the sound is 'contemporary' country but there is very little about this talented and unusual band that gives a feeling of being contemporary with anyone.
I can't imagine there are too many albums that have a fusion of Balkan music, blues, and hillbilly and if there are, they won't be as good as this tremendous recording. Those disparate styles not only don't clash but they hold together better than most albums that keep to one style. A unique and hugely enjoyable recording!