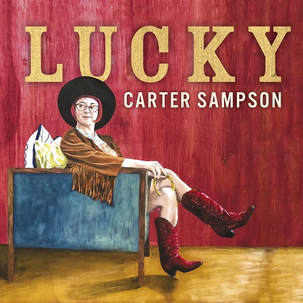 Like many people I first sat up and really took notice of Carter Sampson with the release of 2016s 'Wilder side,' the album that really gave her public profile a huge boost in both Europe and America. I had been at least aware of her since early in the decade when she self released the excellent 'Mockingbird sing' but 'Wilder side' cemented what most people who had heard any of her recordings suspected, that here was a huge talent who was more than able to give the mainstream country 'stars' a run for their money! It's pleasing for all who have ever seen or heard her perform to say that 'Lucky' more than confirms that quality, in fact to my ears it is even better than the sublime 'Wilder side.'
Lucky is Carters fifth full length album since 2004s debut 'Fly over the moon,' during which time there has also been an excellent five song mini album/e.p so there is plenty for the new fan to investigate, something that anyone hearing Lucky will feel compelled to do. Of the ten songs, four were written solely by Carter, three in conjunction with Jason Scott, one by Zac Copeland, the gorgeous Tulsa by Kalyn Fay and finally Shel Silverstein's now classic and never bettered Queen of the Silver Dollar.
The lineup on this album includes Carter Sampson on lead vocals, tenor guitar and  acoustic guitar, Jason Scott, who also co produced with Carter on backing vocals, drums, acoustic guitar and mandolin, highly rated singer songwriter Jared Tyler, dobro, backing vocals, banjo and mandola, with James Purdy on drums. John Calvin Abney, another talented Oklahoma based singer songwriter played keyboards, electric guitar, harmonica and percussion, Kyle Reid also played some keyboards, electric guitar and pedal steel, with other local based friends chipping in with more help.
The percussion, melodic guitar and dobro get things going on the album opener and title track Lucky, soon joined by Carters lovely feminine vocal but it's always a vocal that, despite the beauty, has an appealing, character laden edge. The fullness of the recordings sound gradually builds, always driven by the metronomic percussion and the dobro although latterly the arrangement deepens and solidifies before easing up again and taking off at the end on this excellent song. There is a gentle melodic guitar intro on Peaches that leads the percussion in soon followed by steel guitar and Carters lovely vocal with excellent harmonies on the chorus with the steel guitar always providing haunting support and the repetitive metronomic percussion providing the foundation on this song that also includes a melodic guitar break. The lovely, intensely dramatic sound of the dobro opens Ten penny nail aided by the shuffling percussion as Carter comes in on the lead vocal then the drums become heavier and the song almost takes on an alt. country feel as the air of drama intensifies. The male harmonies and electric guitar add to the depth of the song as does Carters gradually intensifying vocal. Final mention goes to Rattlesnake Kate, an excellent true story song that is one of the highlights of Carters live performances. On this recorded version there is a nice easy going percussion and haunting dobro as Kate fights to protect herself and her child, eventually winning out and making a 'snakeskin gown' from her would be killers. It is an incredibly uplifting story of a lady who did what she had to do to survive and beautifully performed by its author.
I've seen Carter play live four or five times and her lovely friendly personality, sense of humour and storytelling wins any crowd over in no time at all. Add her high quality song writing and gorgeous vocals and she is no longer a promising country singer songwriter but one who can now be talked about as being one of the very best around. If 'Wilder side' sowed the seeds this tremendous album brings that talent into full bloom.