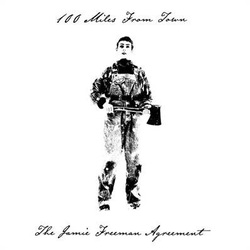 This is Jamie Freeman’s second album, the first, ‘Just You’ released in 2011 was in every way a terrific debut, whilst this new one, which has a band format, ups the quality and diversity a further
notch. I can’t explain why but when I hear Jamie’s music I can’t help thinking of a young David Bowie or even XTC! Perhaps it is his voice, although I don’t think he sounds that much like either, or maybe the musical diversity that ensures the listener knows he is not a slave to any particular style, which may be more likely. I really don’t know for sure, but what I do know is that he is a high quality singer songwriter who has an original style and a versatile approach to making music, with the ability to write some dramatically  poetic lyrics as well as ‘story’ songs. Although most of his songs are rooted in country and folk music he is not afraid to move into what is probably easiest described as pop rock. Don’t worry though, in mentioning the ‘P’ word this is a long way from the bland pop music so beloved of the ‘masses.’ It is high quality, beautifully written, arranged, sung, played and produced music that keeps the listener in thrall for the entire twelve songs of this album.
Whilst much of Jamie’s music is rooted in Americana (Yes, I know there is an equal argument that Americana is rooted in Europe!) he never tries, as many do, to put on a false American accent, which is perhaps what helps to give an appealing quirkiness to most of his music. And yet, the power of that music, even the more overtly country songs, is not diminished in any way by that refusal to put on an act, something that adds to the realism of this excellent recording. I picked up on his debut the fact that as an arranger of the instrumentation on his albums he seems to get everything spot on and when it comes to the production there is a lovely clear open spacey feel even on songs with a fuller instrumentation. He seems to have an instinctive ‘knack’ for getting everything perfectly in balance and co-ordinated, and yet there is always a strong dramatic edginess to the  performances and sound.
The always excellent ‘Agreement’ consists of Jamie on lead vocals, acoustic and electric guitars, mandolin, drums, organ and piano, Abigail Downs, Backing vocals, Jessica Spengler on bass guitar, Jonathan Hirsch, electric guitar, banjo and dobro and Joe Ellis on drums. The overall musical quality wasn’t harmed by helping hands from the beautiful vocals of Rachel Davies, Larkin Poe, BJ Cole, Richard Smith and the Good Lovelies who all helped to provide even more colour to these tremendous songs. Jamie produced the album, with Mark Chadwick as consultant producer and all songs were written by Jamie with the exception of Steel Away by Jamie Freeman and Brandy Zdan, Message To Limbo and
Scrabble In Afghanistan by Jamie Freeman and Amy Tudor.
The album opens with The Knight, an intensely dramatic song with chiming guitars, mandolin and a powerful attack, with Rachel Davies tremendous soaring vocal supporting Jamie’s inventive storytelling. The fiery guitar work is beautifully supplemented by the stabilizing effect of the mandolin and a lovely heavy bass sound on a story that keeps the dramatic content high. Hey Hey Indiana is an incredible song, with a chorus that I just can’t seem to get out of my head! In many ways, despite the gorgeous melodicism it is an overwhelmingly dramatic story song that has a powerfully intense atmosphere with Jamie’s vocal perfectly expressing this sinister sad tale, supplemented by Rachel's stunningly beautiful harmonies that further raise that sinister feel. Scrabble In Afghanistan has a powerfully chugging guitar sound that also includes a lovely melodic ‘jangle’ on an excellent mid tempo country rock song that without ever going over the top catches the sense of drama that all involved in the story must feel. That drama is not just presented by the lyrics and vocals but is actually intensified by the build of the hard driving but melodic instrumentation. This is followed by the unusual Down From London, with it’s excellent mandolin and snare driven sound that whilst thematically rooted in England, instrumentally has an American civil war feel. Eventually a melodic electric guitar joins the mix on another dramatic tale, this one propelled by a scarily threatening murderous intent! We are even treated to a terrific a cappella song with just handclaps and Rachel Davies, Abigail Downs and Jessica Spengler adding gorgeous harmonies on Hey Mama a song that has a strong gospel feel, more so than many gospel songs! Jamie’s vocal underpins and drives the song whilst those harmonies supply a beautiful intensity to a song that could almost have been an old ‘field holler.’ There is even an excellent easy going ‘1950s’ rock ‘n’ roll song with the chirpy propulsive guitars and ‘doo wop’ harmonies on Two Sugar Baby and finally on Annie Run Away there is a terrific ‘walking bass’ line on a song that has an almost ethereal feel. It has such a lovely chugging pace that the song sticks in the memory long after it finishes on this haunting, intensely mysterious tale that leaves a feeling of sadness when the listener learns how long since ‘Annie’ disappeared. Rachel Davies’ gorgeous haunting backing harmonies serve to add to that note of haunting
sadness.
The songs on this album have a broader scope, both musically and stylistically, than on Jamie’s previous recording and whilst everything can be placed under the ‘roots music’ banner there are no heavy ‘rock outs,’ but there is a huge amount of diversity, without anything being added purely for effect. This is something that the album really benefits from, leaving us with a beautifully conceived, recorded and performed album of songs that run the full gamut of emotions, some of them almost overwhelmingly so. What more could you wish for?!