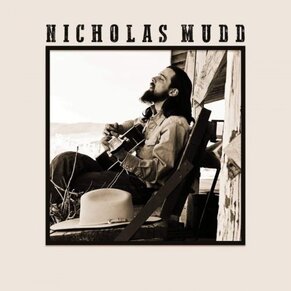 To my ears this self titled debut album from 'Nicholas Mudd' is classic 'country music' that could easily be accepted by the mainstream if they could also accept that something not overproduced and without the highly polished sheen of most country pop should be given a chance. The arrangements are fairly sparse but have everything they need, from guitars, steel, percussion, bass and fiddle with occasional harmonies and some excellent lead vocals.
Nicholas Mudd arrived in Los Angeles eight years ago after a cross country ride on his Harley from his home in Lexington, Kentucky and put his degree in theatre to good use in earning a living. Eventually though, the lure of music became too much, with the result being this excellent recording. All eight of the songs were written by Nicholas and whilst being relatively short, at just over a half hour it is an album, like a few others I've reviewed recently, that repays use of the repeat button. It was recorded and produced by Eric Rennaker at Bedrock L.A. with a lineup that consisted of Nicholas Mudd on lead vocals and acoustic guitar, fiddle was courtesy of Lydia Luce, Matt Pynn on pedal steel guitar,  Iain Weigert played electric guitar, with backup vocals from Paige Calico, bass, Michael Gomes and drums, Travis Popichak.
I've seen Nicholas described as a 'neo-traditionalist' which is probably fair enough, although there is plenty in his music to set him apart from most, perhaps in a similar field to artists such as Colter Wall or even Tyler Childers. Certainly he has that same presence and sense of individuality in both his songs and his excellent vocals.
Album opener Come with me tonight is a good example of his blending of country's roots and sub genres with its mix of rockabilly and country that has a strong edginess. He is aided by some excellent harmonies and metronomic percussion with gorgeous steel guitar and twangy electric guitar plus an excellent rocking guitar solo. High lonesome is an acoustic guitar led ballad that actually has a lovely 'high lonesome,' rural feel.  The haunting steel guitar, occasional fiddle and gentle percussion come in to add colour to the proceedings as the song slowly takes off but without ever raising the tempo. A nice warm melodic guitar sound opens Fly away, soon joined by the fiddle and Nicholas' excellent expressive vocal. As the percussion comes in and the tempo lifts a little some lovely female harmonies blend in to add yet more emotional depth on a song that somehow creates a dark atmosphere. On Lady of the night a nice moody acoustic guitar opens the song, quickly joined by a funereal paced fiddle and Nicholas' haunting vocal on an equally haunting ballad. Some lovely angelic harmonies add to the depth of the song with percussion coming in latterly giving the composition a little fuller sound and enhancing the varied textures. As the fiddle changes tone towards the end of the song a 'high lonesome' atmosphere is created.
There is more than enough in Nicholas Mudd's voice, songwriting and arrangements to set him apart from 'the crowd' and create an air of not only individuality but also an 'edgy' originality on this excellent debut recording that augurs well for the future. Who can ask for more? Certainly not I!