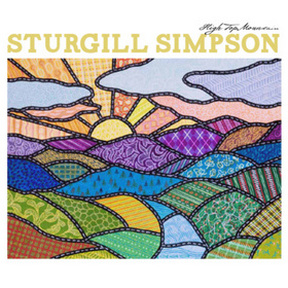 
Sturgill Simpson’s first and only recording prior to this terrific album was with his band Sunday Valley on their excellent 2011 c.d, ‘To the wind and on to heavan,’a collection of songs that
veered, at times wildly, between hard driving alt. country rock and what in many ways was pure ‘hard’ country. Because it jumped about stylistically it was a difficult recording to get a real feel for but on this first solo album by Sturgill the direction has changed and this is a fully formed ‘hard country’ album albeit one that still has a little of the alt. sensibility! In a nutshell, the first was a very good album, this one is brilliant! Hindsight being a wonderful thing it now seems obvious that there was a tremendous country singer songwriter within the  bounds of Sunday Valley, if only he could get the opportunity to break out and prove it. He has certainly done that now and whilst he could easily be looked on as one of the very best alt. country vocalists, at times there are echoes of the late great George Jones, evidence that he has a voice of quality and a tremendous flexibility!
All of the excellent songs are beautifully written by Sturgill except the last couple of tracks on this twelve
song album that are written by Ray Cline/Ralph Stanley and Steven Fromholz respectively, giving some idea, to those that have not heard of him before, of his roots and direction. His own songs are qualatively on a par with these two greats and are very much tales of life that include stories of lost love, tales about a struggling musician and even stories of a hard working coal mining community. The album was produced by Dave Cobb and recorded at a couple of locations in Nashville, but don’t think, despite this being classy country music, that it is going to be just another Nashville country album. Whereas much of that is sanitized this album has a genuine hard edge that is obvious to those that really listen. As music in the background (not sure why anyone wants that, but some do!) it would sound like a pleasant, if high quality, country album, but when you listen to the album properly, it becomes obvious that this is a quite sparse recording with none of the sand papered smoothness of so much other country music. The band plays with great skill and where necessary plenty of restraint and consists of Sturgill on lead vocals, acoustic guitar and Telecaster, Hargus "Pig" Robbins on piano, Chris Powell, drums, Robby Turner, steel guitar throughout and bass on tracks 1, 2, 3, 5, 7, 8, 10, Brian "Freedom Eagle Bear" Allen, bass on tracks 4, 6, 9, 11, 12, Bobby "Diamond Bob" Emmett on organ and mellotron with Leroy Powell, steel guitar on tracks 6 and 9 plus backing vocals on track 6 and finally Dave Cobb, 12 string electric guitar on track 7.
The album gets under way with Life Ain’t Fair And The World Is Mean, a strong mid tempo country song with terrific twangy electric and steel guitars, brilliantly sung and played on a tale that sums up the lot of the modern ‘real’ country singer songwriter who refuses to ‘sell out.’ Could well be biographical, something that seemingly applies to most of the songs on this tremendous recording. This is followed by Railroad Of Sin a fast moving up tempo honky tonk piece of excellent twang and steel guitar country rock about leading a dissolute life, knowing it, but with no obvious signs of any great regret! The Storm includes some lovely haunting steel guitar on an unusual country song that has incredibly poetic lyrics about a man abandoned by his lover and using the storm as an analogy for his emotional state. It is beautifully written and whilst the string (mellotron?) backing seems a little unnecessary it is still a tremendous song. You can Have The Crown is another incredibly well written mid tempo country rocker about a musician with writers block and lack of a record deal and tells of the consequences and knock on effect for his wife. Again included is the gorgeous steel guitar and deep twangy electric guitar on a song that really describes the frustration and sadness of his situation. It is easy to imagine this, as with most of his other songs being sung by a singer of the caliber of George Jones, although the depth of feeling and commitment would certainly not surpass Sturgill’s emotive vocals that, whether deserving or not, engender great sympathy for the characters in his evocative stories. Old King Coal is another hugely evocative slow moody country ballad that tells the beautifully detailed and succinct story of the pros and cons of a coal mining life that has run through the generations and tells of the problems with which thay are faced in the modern age. Finally the two covers, Poor Rambler and I’d Have To Be Crazy are both excellent, with the former having a nice rockabilly feel and the latter slow moody country ballad has rarely if ever been bettered.
Ultimately, this is an album that could do well on the edgier side of the mainstream if given a chance. There
are few better vocalists in this genre and those that are, don’t possess his  songwriting abilities, or perhaps more importantly his depth of feeling and lack of fear in taking some of his songs slightly away from the classic country field that he so obviously has huge expertise in and a little nearer to the alt. side! To sum up, close to the mainstream but with a tremendous individuality that very few, if any, can match.