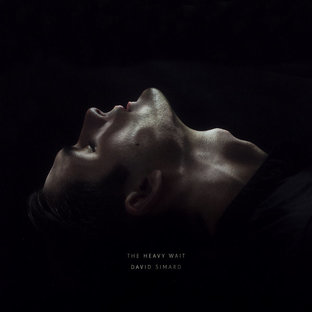 This is only the second full length recording by David Simard but has the confident feel of someone who has been making albums for very much longer. I loved his debut but contrary to the often held belief that things take a dip with the second recording this is texturally and qualitatively a leap forward despite that debut's excellence.
This is an album built on incredibly expansive country music; often having a spooky, sometimes even sinister, atmosphere, not in terms of the lyrics, but in the way David manipulates his versatile voice and the often unusual arrangements. It's rare that anything gets above a sedate mid tempo and it has a sparse feel although this is more in terms of the superb production that allows every instrument to be heard rather than being lost in the mix. Despite that generally very slow tempo there is an appealing variety in the textures that avoids any saminess, thanks in part to David's incredible vocal performances but also the tremendous arrangements on an album that constantly reveals more depth with every play of this sometimes otherworldly atmospheric disc
His vocals, that are always warm and incredibly expressive, have a similar all encompassing style to very few others, in fact the only one that comes to mind is Petunia (Petunia and the Vipers) and whilst David doesn't quite have the vocal range the texture and clarity of diction bear an at least passing resemblance. He is often described as a folk crooner, but to me there are many 'crooners' who sound pleasant but lack any real range or character. David Simards voice is loaded with both! Having written, arranged and produced the album himself it is safe to assume he knew the requirements of his voice and was able to cater for them, although it's difficult to imagine anything that wouldn't suit his excellent vocal style.
The core band is David Simard on lead vocals, guitars and keyboards, Patrick Latreille on double bass and Evan Tighe on drums. Their sound is supplemented by the steel guitar of Aurelein Naffrichoux, Sky Lambourne on trumpet and trombone, Joseph Abbott on clarinet and Brie Neilson adds her lovely harmonies to many of the songs. All of the above named instrumentation works beautifully together, with nothing being over used, in fact the albums sound can be described as 'sparse' although not to a real minimalist degree, more adding various shades and textures to suit each songs requirements.
The album has a lush sound that conversely also has a sparse feel whilst also being strangely multi textural. Contradictory maybe, but this recording is hugely unusual and revelatory in the depths of each song, in fact it is very much a recording where less is more in terms of notes and tempos. At times it is slow and mournful, occasionally virtually a drone but such is the fluidity of that sparse instrumentation and his incredibly manipulative and appealing vocal style the album becomes engrossing and addictive. Despite the pervasive and often haunting darkness that seems to envelop most of the songs it is not depressing in any way, in fact most of the lyrics are not really dark, perhaps thoughtfully reflective and sometimes poignant, but certainly unusual.
A nice slow twangy bass sound opens The Line and is soon joined by steel guitar and percussion on a tale full of melancholy that will only suit the most expressive of vocals. Fortunately David Simard is that vocalist! The brass adds to the air of moody melancholia on a song that whilst sparse and played at a funereal pace lets the listener know this album is going to be something very special. A rolling bass line, soon joined by twangy guitar and speedy metronomic percussion, gets things moving on The guitar player, an unusual but incredibly melodic song that has a deep almost spooky atmosphere, something that is prevalent throughout the album, even including jazzy brass at times.  Cat's Cradle is another song that gets under way with a slow twangy guitar intro with deep bass and percussion and again, a funereal pace. The guitar sound varies texturally on a sparse arrangement that includes snippets of other instruments such as clarinet and trombone but always sparingly used, allowing the vocal all of the space necessary to get the best out of a song that has an epic feel. Often, since the mid way advent of brass it is easy to imagine being in and around a New Orleans bar late at night and with a mist swirling around, creating an otherworldly spookiness. Take me in has more of a bass string attack, albeit spare, on this lovely sedate song that again has a lovely melodic feel, with the vocal not coming in until about a minute and three quarters in on a song that builds the dramatic content by adding some gentle harmonies and by a variation in the power of the plucked guitar notes. At five and a half minutes a song this slow really shouldn't work but to say it does is an understatement. It is the arrangement of the instruments and the buildup of the melody added to the atmospheric vocals that achieves such an epic atmosphere.
This incredible recording often has an atmosphere that is reminiscent of the misty moodiness of classic 1940s 'film noir,' in fact this tremendous album is classic 'country noir,' perhaps even defining this term with its powerful atmospheric spookiness, as inherent in this as it was in the old hillbilly music, but with a very twenty first century perspective. Treat yourself to the majestic moodiness of 'The Heavy Wait' and I guarantee you won't regret it!