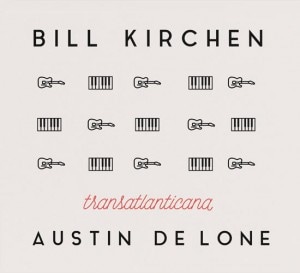 The master of the Telecaster and a godfather of the early 1970s London based 'pub rock' scene get together for the 'umpteenth' time and treat us to as good an album of 'good time' music as you could possibly wish to hear! Not that every song is a party song; far from it. There are songs of sadness, great drama and certainly songs related to good times but the real good time element comes from the obvious friendship that exists between these two hugely talented men.
Bill made his name as a member of the 'Commander Cody & his Lost Planet Airmen' band who have been such favourites of mine over the last forty plus years, whilst Austin was a member of London based U.S. band 'Eggs Over Easy,' who were arguably the band who started the 'pub rock' movement. I say movement because it was never actually a genre, defined more by the locations they played in than any particular style, Eggs being a band who were pretty much immersed in 'Country rock' and a little bluesy R and B. His instrument of choice is keyboards, with the two men combining to play some incredible music that lifts the listener as high as any good time music previously recorded and then lowers you with the saddest of ballads but their sheer pleasure in playing music together will be obvious to anyone with ears!
The album was recorded in Austin, Texas and in London with a cast of some of the finest roots musicians around, the list being too long to include here, but it contained artists such as Butch Hancock, Gurf Morlix, Rick Richards, Sarah Brown, Louise Kirchen and quite a few more! Having said that, it is certainly not an album that is overloaded by 'celebrities' for the sake of it. The arrangements are exceptional and the instrumentation is never over done, whilst the vocals are always excellent and the playing as top notch as you would expect. The whole album has an underlying warmth that makes me think that perhaps this shouldn't just be an album 'for old times' sake' by two men whose careers have been linked on and off for decades and who have been friends throughout that time, but could it perhaps signal the start of a new 'duo?' Certainly their musical interplay and tastes are closely linked, whilst their agreement on the choice of songs has enabled them to explore a variety of genres, emotional roller coasters and tempos as well as some of their own songs and favourites written by others. In other words an excellent summation of their musical tastes and one that flows beautifully from song to song whether mellow ballad, upbeat country rock or even a little rock 'n' roll.
The album kicks off with the Kirchen/Blackie Farrell co write and tribute to Merle and the Bakersfield sound,' Hounds of the Bakersfield with an excellent atmospheric vocal and Bills signature Telecaster sound. Let's Rock is an easy rolling, chugging rocker that was a co-write between Bill and Austin and whilst it does rock, the country element is never too far away. Butch Hancock wrote and dueted with Bill on Oxblood, a tremendous song that is crying out for Butch to record on a new solo album? If only! Warm and Tender love showcases Austin on vocals, with little more than just a suppressed percussion, Bills tuneful and equally restrained guitar and Austins beautiful 'tinkling of the ivories' on a mellow soul ballad once recorded by the great Percy Sledge.
And so the album continues with great performances from all concerned on twelve excellent, if stylistically disparate songs, all bound together and blended by the musicality and personalities of two great roots musicians who got to where they are today by sheer talent and paying of their dues! A tremendous album that will soon have listeners joining with me in crying out for a sequel.