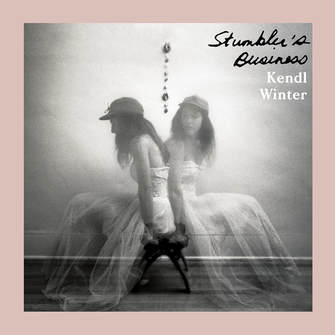 Kendl Winter is a hugely talented singer, songwriter, banjo and guitar player who has released several tremendous solo albums, her 2016 release 'It can be done,' with Summer Gold, having been reviewed on this website. She has also released albums with The Blackberry Bushes, Southern Skies, The Pasties and her ongoing duo project that she shares with Palmer T. Lee as The Lowest Pair whose five incredible album releases are essential listening for anyone claiming to like modern old time music, or hillbilly, or any of the other offshoots that are linked to the various strains of 'folk music.' After many years of writing about music and a lifetime as a music fan there are still some artists that I get a buzz from when I know a new album is on its way. Kendl Winter solo, duo or group is one such artist!
Kendl's banjo skills are much praised and in demand and her beautiful feminine vocal style recalls those 'old time hillbilly' days with her appealing twang that cannot be mistaken for anyone else. In a nutshell, she should be a household name everywhere! The fact that she isn't is because she has so far refused to be 'moulded' by a record company, always choosing to plough her own highly individual path along whatever route she chooses without keeping to a particular generic strand, although it is true to say that thread of old time folksiness is never too far away.
This new album, perhaps on occasions, strays a little further from that thread but never so far as to be isolated and  she is such a unique musician that there is never any doubt who you are listening to on this wonderful fourth 'solo' album. It contains eleven tremendous songs, ten of which are Kendl originals and one, Pretty Saro, a stunning version of the old British folk ballad. Kendl takes all lead vocals as well as playing banjo and guitar, with help from Joey Capoccia who provided bass, backup vocals and guitar on Artesian Well and Beauty We Beg, with Derek McSwain on mandolin and Joey Seward who recorded the album at Leftfield studios also on percussion and organ.
As with Kendl's other work there is often a feel of experimentation although it could just as easily be termed 'a gradual expanding of her boundaries;' it being difficult to tell with such a unique artist who you just know will never be guilty of reverting to a predictable formula. Exactly the sort of artist disliked by the Nashville conveyor belt but who brings huge musical rewards to those of us who love music that has its deep tap root in the real country/folk tradition. That tradition is what descends from the early days of recording (and before) when roots music was either 'hillbilly' or 'race music' dependant on the colour of a person's skin, despite the reality being that those two rural strains were virtually one and the same. It is commerce that separated and gave rise to a variety of stylistic names and generic offshoots and it is artists such as Kendl Winter who are able to produce music that is of their own modern time whilst having easily recognizable roots that date back many decades, rather than producing the sanitized 'country pop' so beloved of this use and throwaway society.
The album gets underway with a slow haunting, melodic guitar that opens the beautiful The river's will before Kendl comes in with a lovely vocal that has a strong 'rural' feel on this song that seems to be rooted in a strange otherworldly urbanity rather than a country background. There is never any mistaking who this artist is though, as she stretches her musical boundaries a little on this gorgeous sparse arrangement. A gentle guitar and percussion up the tempo a little on Solitude, another song that is rooted somewhere between the urban and rural on a tale that has an appealing melody with nice harmonies and a 'perky' performance from Kendl. There is more going on musically than on its predecessor but still a sparse arrangement. As with any song, it is carried by Kendl's often quirky vocals that have the ability to evoke any emotion from joyous to deeply haunting. On The Artesian well we are re introduced to Kendl's hauntingly evocative banjo as her vocal blends beautifully with the instrument that in some ways always strikes me as her natural 'habitat.' The bass underpins the song on what could almost be termed a modern 'hillbilly' tale, with Joey Capoccia interjecting his own vocal at times as the song speeds up and fills out with a restrained guitar and mandolin. Kendl again has her banjo for company on When she did, another haunting, otherworldly song. As with several other songs on the album there is a strange, 'out of time' (at least out of a time and a place I recognize) feel to the song. It is just voice and banjo but there is a slight echoing feel to the banjo and Kendl's quirky vocal style. It is certainly a song that has a 'high lonesome' feel but one that is difficult to place in any time frame; perhaps a 100 years ago, perhaps yesterday?!
There is much to mull over and absorb on this unusual but quite stunning song collection but look on the bright side! When you've listened to this incredible album you will then want to explore Kendl's back catalogue, some of which are easy to find, others much less so, but all hugely rewarding. If, like me, you are a long time fan or perhaps even 'late to the party' a few listens to this album and it will be a party you will never want to leave!