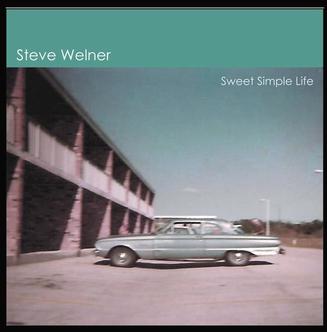 'Sweet simple life' is Steve Welners fifth album but the first issued under his own name. Of the previous four, three were the band 'Fourteen Feet' and there was also 2012s tremendous, 'Hope and Fear' by The Welldiggers, about which I wrote a rave on this website. On all of those albums Steve wrote all of the songs, as he did on this one, produced all bar one (Eric Ambel on production duties on one of the 'Fourteen Feet' albums was the exception) and has the kind of versatile, full of character vocal style that gives anyone in any of the 'country music' offshoots a head start when it comes to quality depictions.
That phrase 'Country music offshoots' is really a cop out because I couldn't really say where Steve Welners music fits in. It's not pure country although there are traces; there are also detectable elements of indie, rock 'n' roll and quite a lot of alt. country and country rock, always assuming the latter two genres are worth separating, which obviously to me they must be, at least somewhere in my what passes for a brain, otherwise I wouldn't have mentioned them, would I? To me, being simplistic, country rock is as it suggests a blend of country and pre punk rock whilst alt. country is pretty much the same thing but with perhaps a punk attitude? I'm not too sure really, but Steve's music is worthy of being called a blend of various and sometimes disparate elements because it's difficult to name anyone else he is really like, with his style being highly individual and quite original and always melodic and interesting. I'm not sure where the boundaries are, assuming they exist, between 'country,' 'alt. country' and 'country rock' but with this tremendous album Steve Welner seems to have built a bridge that links them perfectly, virtually making a short cut between the elements as if his style is a unique  generic standard.
The musicians on this recording are Steve Welner on vocals, acoustic guitar, electric guitar and harmonica, Bob Stander, bass and electric guitar, Eric “Roscoe” Ambel, electric guitar and vocals, Paul Errico played keyboards and accordion, Shawn Murray on drums and “gang” vocals with Gina Forsyth on fiddle. They were helped out with some vocals by Janet Montalboand Don Gabis whilst all twelve of the songs were written by Steve Welner and the album was produced by Steve in conjunction with Bob Stander. Steve's vocals have that lovely 'rural twanginess' that makes the listener think of 'country' music almost immediately and everyone who played on the album obviously had belief in the project because the combinations have the feel of a band who have been playing together for years and know instinctively what each member is going to do and what the songs require.
The very first song on the album is Sweet simple life a classic country rock ballad that rolls along nicely with an excellent vocal from Steve, harmonies that further lift the song and peerless playing,  all linked by hugely evocative lyrics and a memorable melody on the album's title track. 'round the pasture has a harmonica and guitar lead in, then Steve's manipulative vocal comes in on a mid tempo song that is rooted in rural country music, both musically and thematically but with a country rock edge. There is a complete contrast on Endless tour with its heavy dramatic arrangement that brings a much fuller sound to an excellent song that is balanced by Steve's descriptive vocal that occasionally reminds me of Tom Petty, as does much of the album, but a Petty on top form, again with playing of the highest quality. Saints of the mardi gras brings a complete stylistic change on an arrangement and indeed a song that has a 'cajun hoedown' quality mainly due to the accordion but not exclusively so. The tempo and overall arrangement further solidifies that feeling with the sawing fiddle bringing further emphasis as do the lyrics! Can't stay dry in a desert is another terrific song that edges between country and country rock with some great playing, excellent vocals and the usual tremendous, warm harmonies and excellent fiddle playing that really emphasizes the country roots as do the lead and harmony vocals and it is probably the case that many of Steve's lyrics give further emphasis to the country roots. Finally, there is a chiming melodic guitar intro to Church van a song that lopes along at an easy going and incredibly appealing tempo with an atmospheric lead vocal from Steve and excellent harmonies. The song has a lovely easy rolling atmosphere with the harmonica adding to the warmth and the restrained but metronomic percussion emphasizing the song. It's a song that could be a great success as a single if subjected to the mainstream!
This is yet another excellent Steve Welner album that exhibits his command of a number of sub genres in and around country music but Steve's vocals and the excellence of the band tie everything together, giving the album a lovely flow. The playing is top notch as is the songwriting and Steve's warm, evocative lead vocals along with all of the harmonies, so for anyone who loves strong melodies (and who doesn't?) you won't find a better album this year, similarly if you like an album that is edgy and lyric driven. In a nutshell, 'Sweet simple life' is an album that any lover of roots music with strong country leanings will need in their collection and one that will be pushing towards the upper echelons of my albums of the year in a few months time!