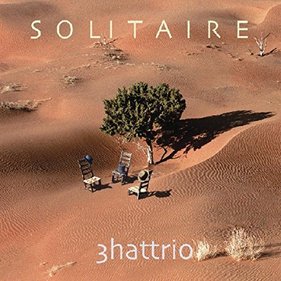 It was only back in March this year that I reviewed the 3hattrio's second album release, the  incredible, 'Dark Desert Night'  and in so many ways the words I used to describe that extraordinary recording can be used to describe this equally unusual, but again quite addictive, album. Their own description of 'American desert music' still holds good as do my phrases, 'deep arid atmosphere,' sparse wide open desert spaciness,' but rather than continue copying words from that review I should come up with something to say about this recording or you will think it is merely a copy which is far from the truth. Stylistically there are obviously similarities; it is the same three musicians playing the same instruments but with new songs and, if anything, a deeper spookier atmosphere.
The songs give a clue to this trio's strange originality with one traditional song, the Marley/Tosh co write, Get up, stand up and eight original songs from Hal Cannon and Greg Istock with several each written separately as well as together. In case you haven't seen the earlier review the trio consists of the above pair, with Cannon on banjo, guitar, mandolin and vocals, Istock plays acoustic bass, foot percussion and vocals with Eli Wrankle displaying his virtuosic fiddle skills.
Much of the music on this album wouldn't require much of an imagination stretch to believe it has its roots in the West African deserts rather than on the rural edge of the Zion National park in the deserts of southern Utah where these three men hail from. If ever an album was contemporary with its maker's lives and their deep feelings for the natural world this has to be it. Solitaire is not only an unusual recording but is genuinely unique in its incredible simplicity and originality. The music is timeless but also has an incredibly deep tap root in its physical location of an arid desert landscape, creating a strange often unsettling atmosphere as if in a Peyote induced haze. It almost beggars belief that a band can come up with a musical strain that contains so much otherworldliness and yet when you combine all of the elements they form something so riveting, original and deeply rewarding however many times you play it and can still be placed under the roots music banner, perhaps even boundary breaking country! There is a cinematic thread that runs throughout the album but one that always seems to lean towards the life many of us visualize the Native Americans lived many generations ago with their world built around a haunting and eerie system of strong beliefs.
The album gets under way with a sparse arid banjo intro with shuffling percussion and guitar before being joined by the eerie but masculine vocals with a strange otherworldly atmosphere as befits a song entitled Texas time traveller. I could and may well keep on mentioning the arid desert feel but to be honest that three word phrase goes a long way to describing this music but there is so much else going on with the varied vocal textures and the relaxed but unsettling tone of the song, something that in many ways can be said about most of the songs on this recording that has a lovely sparse arrangement. On What do you do the duet vocals that have an almost choral feel with a haunting fiddle combined with mandolin lifting the atmosphere but at the same time creating even more depth and a strange ethereal quality that I just know that few if any others could match. The bass keeps the song rooted in the depths and the fiddle creates a deep spookiness along with the vocals, whilst the acoustic guitar provides a little normality and light. Mojave commences as an instrumental that is about as eerie as you will ever hear with banjo and fiddle dominating and the throbbing bass laying a planet solid foundation. Then, after about two minutes a strange otherworldly vocal comes in as if the singer has caught the tempo and could no longer restrain himself. Some of the background sounds from the treated fiddle creates and emphasizes the spooky otherworldliness of the song. Finally, the percussion on Eddy Mesa has an African feel with the eerily treated fiddle intervening with the even deeper throbbing bass and an excellent vocal that helps to enhance the atmosphere. The fiddle has a hazy sound as if emphasizing the unbearable heat of a desert at mid day in which nothing can survive, eventually leaving the vocals behind and creating a soundscape that enhances the arid quality.
Whilst I have used quite a number of words that will make the reader think this is floaty ethereal music, the songs all have an individual structure and can be listened to and derived pleasure from whether you like music that leans towards country or not. It has the feel of something that is conceptual but only in terms of its location and flow; the songs being very much separate, though loosely linked, entities that together combine to create the otherworldliness. I know this is repeating a theme that has followed me throughout 2016 so far but this is another album that will be, without any shadow of doubt, an album of the year contender for me and, I suspect, most who hear this extraordinary album! Solitaire is a genuinely remarkable recording and one that continues to repay repeated listening sessions thanks to its haunting power and great depth.