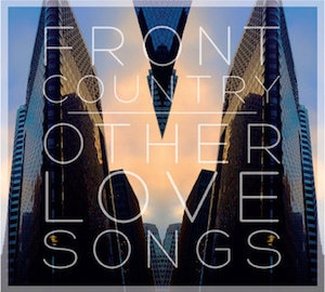 I reviewed Front Country's 'Sake of the sound' back in 2014 and Melody Walker and Jacob Groopman's 'We made it home' a year earlier. Why mention these two albums together? The reason is that Melody and Jacob make up two fifths of Front Country, a band that I struggled to describe or label three years ago only to find it is even more complicated with this excellent new recording.
There have been several lineup changes since 2014, although Melody is still on vocals, guitar and percussion, with Jacob on guitar, resophonic guitar, mandolin and vocals. Adam Roszkiewicz plays mandolin, banjo and vocals, whilst Leif Karlstrom is on five string violin and new member Jeremy Darrow on bass, with the album being produced by Wes Corbett. Of the twelve songs, eight were written by Melody Walker, two by Adam Roszkiewicz, both of which are tremendous instrumentals, T.H.A.T.S.(The humpback and the Sloth) and the short but beautifully formed Sometimes it does. There is also the traditional Storms are on the ocean and an excellent version of David Olney's Millionaire.
To say the playing is virtuosic is an understatement! That virtuosity is a problem if we really need to label the genre, (which I know we don't really!) given that their command of the instruments they play is so exceptional that it's difficult to visualize anything in roots music that this band couldn't master. Elements that come to mind whilst listening to this recording include bluegrass, jazz, rock, country, perhaps even a little bluesiness, all performed with a distinct edginess and little if any sanitization. None of those elements are dominant either, each just being a vague feeling, with several or sometimes all being apparent in the blend of each song giving the album a completely unique feel. The band describes their sound as 'roots pop;' as good a description as any I suppose, assuming we actually do need to affix a label! Whatever umbrella we choose to install this group under their music is exceptional, with Melody's vocal and to a degree the instrumentation being what binds the albums twelve tracks together. Having said that it has to be remembered that two tracks are the already mentioned instrumentals and another includes a very good lead vocal from Jacob, equating to an even greater diversity on this excellent album.
Melody's songwriting is so good and her vocals so beautifully expressive that any band that can include her in their number must have a chance of success. When you add the four gifted men to the equation and the musical support they all give willingly to their musical visions, failure to achieve that success seems very unlikely! The beautifully conceived opening song If something breaks is an excellent example of what will be found in the twelve songs on this recording. It gets underway with a mellow acoustic instrumentation, soon joined by Melody's beautiful, expressive vocal on a tale of romantic trials and tribulations. The instrumentation is never dense, always allowing the song to breathe, with some excellent harmonies and fiddle, guitar and mandolin well supported by a little percussion and the throbbing bass. Lonesome town is quite a stunner; being a song that has a 'hillbilly' or even at times a country rock feel, with resonator guitar driving the sound and the lively fiddle and mandolin wending their way through the song, with percussion and bass again laying an excellent foundation, in fact Melody's manipulative vocal actually reminds me of a young Linda Ronstadt. Storms are on the ocean is a song that musically starts slowly and builds on a jazzy version of the traditional song. There is the 'usual' guitar, fiddle, bass, a little percussion and the mandolin but the playing seems to meander off in a variety of directions with just that restrained percussion rooting everything. The playing brings an unusual jazziness that is added to by Melody's fluid vocal that has a strange improvisational quality. That 'jazziness' is something of a thread that runs through many of the songs on this unusual album that makes generic definition so difficult.
A lovely haunting vocal from Melody gets Good side underway before the excellent male harmonies join in on the chorus of a tremendous a cappella song, written by Melody. These few mentioned songs go some way to exhibiting the extraordinary variations that can be found in so many of the generic strains within roots music if the talent and vision is allowed to flourish, pretty obviously something that producer Wes Corbett encouraged.
I'm not too sure I agree with the 'pop' element in the bands own definition though. I define pop, rightly or wrongly, as usually unchallenging music that appeals to lovers of the mainstream, is often twee and manufactured, gets an indecent amount of media exposure and promotion and is often here today and gone tomorrow. Certainly 'Other Love Songs' is music that should appeal to all (or at the very least, most!) but it is music that is challenging and certainly not meant as background whilst doing something else (although at a pinch it could be used as such on occasions!) I know my definition of 'pop' is riven with inaccuracies and that some of it can be challenging but the depth and talent that this group of musicians possesses is something that very few 'pop stars' can have any hope of attaining. Treat yourself to the album and you can hear exactly what I mean. I'm sure you will thank me. A pint of good ale will suffice!