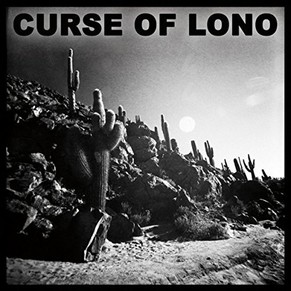 This tremendous debut e.p by 'Curse of Lono' consists of four haunting, otherworldly and intensely dramatic songs with traces of early Pink Floyd, southern gothic country, Robbie Robertson's first solo album and even Daniel Lanois! O.k, it's not exactly like any of them but there are trace elements that remind me of all of the above as well as being powerfully cinematic.
The London based band took their name, 'Curse of Lono' from a book by Hunter S. Thompson that was based on his experiences in Hawaii in the 1980s. Felix Bechtolsheimer and Neil Findlay had worked hard in their previous but sadly now defunct band, Hey Negrita, (they released four excellent albums) but after taking a break Felix still had lots of songs in his head so he and Neil decided to start another band and 'Curse of Lono' was born. They are now a five piece that consists of Felix on vocals, guitar and songwriting, Neil on drums, with Joe Hazell, lead guitar, Charis Anderson plays bass and Dani Ruiz is on keyboards.
The four songs are varied, consisting of a deep dark atmosphere that at the same time has an arid feel in much the same way as early Giant Sand but with a powerful, spooky dynamism. The tempos never stray far from a relatively sedate mid tempo and yet they seem to be more varied than that would suggest thanks to the tremendous writing and arrangements, with exceptional instrumental performances and lead vocals that could not be more perfect for purpose. Felix Bechtolsheimer has always been an excellent vocalist, able to sound dark and threatening as well as gentle and melodic and able to create an evocative atmosphere whatever the subject matter of his highly individual songs.
It is difficult to judge any band on the strength of just a four song e.p but when you tag this recording on the end of Felix and Neil's previous work you just know there are some huge talents at work here and whilst this is different to 'Hey Negritas' music there is an overlap that will ensure anyone who hears this recording will be drooling at the prospect of a full length recording! I certainly am and as a bonus they are soon to start playing some gigs in mainland Europe as well as the UK and for anyone in or around the surrounding area of Brighton, Curse of Lono are going to be playing a gig at the Prince Albert, Brighton on 4th November as support for another tremendous band , Uncle Lucius. I'm not going to miss that if I can help it, nor should you!