RITA HOSKING - FRANKIE AND THE NO GO ROAD 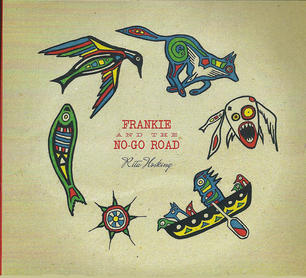 I have loved every one of the five studio recordings (and one live album with husband Sean) that Rita Hosking has released prior to this, possibly career defining, beauty of a recording. When it comes down to musical talent Rita has it all, with a vocal style that is almost as distinctive as Buffy Sainte Marie's, although less hard and with a greater femininity, a quality of songwriting that has her few peers drooling with envy and an original way of putting it all together. At times, particularly on the ballads she exhibits a stunning, haunting beauty in her style of music that feels firmly rooted in a folksy Appalachian strand of country music with an edgy, sometimes eerie, old timey atmosphere.  All this despite being a Californian native, albeit from the rural Shasta County, a mountainous region that perhaps is where the similarity with the Appalachian feel comes from, albeit with enough differences to draw on her own unique individuality.
Rita plays guitar, banjo, four-string guitar, harmonica and  lead vocals,  Rich Brotherton, guitar, banjo, mandolin, cittern, National guitar, bass, keyboards and harmony vocals,  Glenn Fukunaga is on upright bass,  Dony Wynn on drums and percussion,  Sean Feder, dobro, djembe,  daughter Kora Feder is on harmony vocals and  Andy Lentz plays violin whilst Glenn Fukunaga plays bass. It is well worth giving Rich Brotherton an extra mention for the superb job he made of engineering the album.  Rita wrote all of the songs and whilst there is a strong conceptual strand it is still a great album when listened to on 'shuffle play!' Every song contains well thought out lyrics that draw the listener in to the world that Rita has created, as well as having strong memorable melodies, some of which are hugely uplifting. Despite the sometimes almost overwhelming beauty there is nothing on this incredible album that doesn't have a powerful edge. The arrangements are generally quite sparse with the dominant instrument, although not on every track, being the beautifully played banjo, something that adds yet further depth to these tremendous songs and because it is not used everywhere the variety is enhanced.
As a fan of Emmylou Harris since her early days I feel justified in saying that to my ears Rita is at least her equal, exhibiting a much greater degree of originality in her mainly acoustic music, with that frequently used banjo being perfectly matched to her musical style. Nanci Griffith in her early career days is another singer songwriter who springs to mind when listening to Rita, having had a distinct edginess in her early recordings prior to a little sanitization taking place but Rita's style has a greater degree of originality than either of those esteemed artists, possibly because of the high lonesome mountain feel and a complete lack of sanitization!
The album opens with a mellow acoustic guitar and Rita's lovely vocals on A Better Day, before the sound fills out a little with bass and percussion, with her voice occasionally taking on the dramatic quality of Buffy Sainte Marie, not all of the time but enough to let the listener know they are listening to a rare talent. It is a song that is searching for a little positivity that will relegate the negatives, all topped off with a quite uplifting melody. The banjo and percussion propel Wetiko a beautiful song that has a powerful sinister edge to the story, perfectly evoked by Rita's vocal and the eerie arrangement on a song that has a deep, if thoughtful, dark atmosphere. A harmonica accompanied by bass introduces I See Storms, a mellow sounding song but with lyrics that are the polar opposite on a pleading story about injustice and to a degree, genocide. The dobro and banjo eventually join in, as do male and female harmonies giving the song an added power on this story that has great depth. Black Hole is an atmospheric tale of hopelessness, with the percussion and Rita's exquisite vocal performance at their most evocative. The song stretches from a gentle melodicism to a desperate aching feel and as with every song on the album, creates an atmosphere that the listeners can lose themselves in. There is a lovely banjo intro supported by the thumping bass on Mama Said a tale that has Rita's questioning vocal ranging from a gentle reflective style to a deep intensity that is occasionally accompanied by the mournful violin.
Many albums that are dominated by the beauty of the vocals and melodies are often bland and soon lose their appeal but this one not only has the beauty but is also strong lyrically, more than enough to take it way above the simply beautiful, but when you add that powerful 'edginess' this sublime recording is pretty much peerless. If we were still operating the star system on reviews this would define what is necessary to be classed as a five star recording!