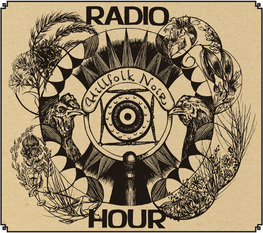 Travis Ward is a hugely talented musician in the ‘old timey’ and blues genres and is responsible for the songwriting, arranging, guitar, harmonica, kazoo and lead vocals within this tremendous band. The icing on the cake however is his wife Alison, whose vocals when blended with his, enhance the old time feel, as does her musical saw playing! I’m not forgetting the other three excellent musicians either. They all bring their own style and feeling for the music to the band with Mike Waite’s immaculate upright bass playing giving the sound its foundation, Shaun King on Banjo adds colour and depth and Jared Goodpaster takes care of all percussion and jug! I should add that as well as ‘singing saw’ Alison also plays triangle, washboard, banjo, kazoo and of course, harmony vocals. The uninitiated could well look at the instrumentation and think this is just music for the museum but somehow this extraordinary band are anything but, with their ability to ‘rock,’ within the constraints of the genre and ensure the music is very much a 21st century strand of old timey.

The albums concept was to sound like an old time radio programme with adverts between the songs for imaginary products made up by the band. It does works really well, adding plenty of humour to proceedings, although by inserting these pieces I can’t honestly say that it actually improves the album, more a case of achieving their aim to give the recording a conceptual identity. Whilst Travis Ward writes old timey songs, albeit often with modern day references, and his vocals enhance this feeling there are also modern nuances, meaning that he would be perfectly suited to modern country music as in the case of Talking Music Blues on which his ‘talk vocals’ and style are a little reminiscent of the late great Townes Van Zandt. He and the rest of this exceptional band deserve huge credit for not taking the easy way out by just making a ‘pop’ album, although maybe this music is the easy way out for them being the genre that they genuinely have a feel for. It’s Travis’s guitar, usually the beautiful chiming resonator, that is lead instrument on most tracks but the arrangements are so good that it’s fairly easy to pick out each individual instrument on most of these evocative songs, particularly the musical saw that often seems to add a smooth, haunting texture behind the gritty feeling songs.

There are so many different offshoots that are often referred to as ‘traditional country music,’ with many relating to what is basically ‘country pop,’ in fact there is probably no other musical genre that has been so subjected to this blurring of the lines as country music. We can’t be absolutely certain of musical sounds before the early days of commercial recording in the 1920s so, whilst it is a little oversimplification of the case, those early recordings really have to be the benchmark that defines the tradition, despite the fact that people have been making music for millennia! If you follow this through to its natural conclusion bands such as Hillfolk Noir are the artists that can justifiably be referred to as playing within the tradition, being a mish mash of ‘hillbilly’ and ‘blues,’ rather than the current preponderance of male singers with their polished cowboy boots and hats and the women in their sequined gowns with string orchestras for support. Although Hillfolk Noir actually define their music as ‘Junkerdash’ a more accurate definition would probably be ‘traditional country music,’ albeit with references to the modern world, but with instrumentation and style generically rooted in ‘old timey.’ I must confess that whilst I love the blues, late 1960s and 70s country rock, western swing and modern alt. country amongst others, there is nothing that quite appeals to my emotions, at least musically, as ‘old timey,’ (or ‘Hillbilly’ as it is sometimes known) so it’s not that easy to be objective. That probably says more about me than it does about the music, but ultimately all art appreciation has to be on an emotional level otherwise what is the point?

Anyway, enough of the ruminating and back to this extraordinarily well conceived and executed album! The album starts with the seemingly quite gentle sound of Down the Road, a nice easy loping song with resonator guitar to the fore plus banjo, harmonica and discordant harmonies with Alison, on a story that has a murderous theme that belies the easy going feeling!If your foot is not tapping on the incredibly ‘catchy’ Run Round Reel, you really need to get your pulse checked. It’s a story song about someone who seems to be impelled to run from every situation and is driven by some gorgeous resonator guitar playing as well as banjo, snare and their usual edgy harmonies. On the evocative Ballad of a Lonely Rounder, the story of a dissolute man who settles down, at least for a while, Alisons spooky sounding musical saw is to the fore accompanied by the resonator guitar and excellent harmonies. There is also a tremendous delta blues song Parchman Farm Blues, that despite its incredible old time feel was written by Travis and is a real throwback to the early bluesmen, with just his vocals, harmonica and some of the most atmospheric resonator guitar playing you are likely to hear. Parchman Farm is a much sung about and equally hated prison farm, where many old delta bluesmen spent time for various crimes including ‘vagrancy,’ a couple of other evocative versions of the subject having also been penned by Bukka White and Mose Allison. There is even space on this exceptional recording for the already mentioned Talking Music Blues a song on which Travis uses the ‘talk vocals’ style that is so reminiscent of Townes Van Zandt on a song that just about sums up commercial music!

This album differs from their previous offering ‘Skinny Mammy’s Revenge,’ only in the respect that this contains all originals and that was their interpretations of old songs. The quality of the writing and playing is equal, showing, as a few other bands have recently, that the ‘old timey’ style of music is very much alive and kicking in the 21st century!

Note: Hillfolk Noir will be touring Britain in June, including a Brighton show! For gig locations click on the following link.