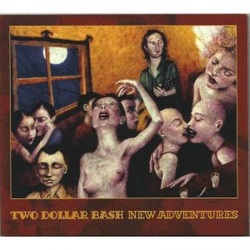 If ever an album evoked the early days of country rock, for me at least, its this one. Ever since the first play, bands such as the Byrds, Burittos, Poco and the lesser known but equally talented Goose Creek Symphony among many others have come to mind. What makes this album even more of a pleasurable listen is the fact that there are only fleeting glimpses of these bands that ‘invented’ the genre. There is no copyist element at work, with this being, within the constraints of that loose genre a highly original recording that pays homage to the past but is very much an album for this century. You could be forgiven for thinking that perhaps one member of this talented trio hails from the Appalachains and the other two from maybe Los Angeles or perhaps San Francisco, but you would be very wrong. Mark Mulholland and Joe Armstrong are both Scots whilst Matt De Harp is a Frenchman!
Their three part harmonies are as good as any I’ve heard for a very long time, the songwriting is excellent as is the playing on these varied songs, with an instrumentation and lead vocalist that seems to change on every track. The songs are all highly melodic band originals with Mulholland contributing six, Armstrong four and De Harp also four. As regards the music, all three handle vocals, with Mulholland also playing acoustic guitar, banjo, electric guitar and mandola, De Harp plays acoustic guitar, mandolin and harmonica and Armstrong handles acoustic guitar, bass, electric guitar, banjo, 12 string guitar and percussion. There are snatches of 1960s ‘garage rock’ blended with a little psychedelia from that same decade, even at times having a distinct folksiness just to keep things even more interesting, in fact it would be easy to believe that Two Dollar Bash are a late 1960s or early 1970s west coast band that have cracked time travel but updated the sound on arrival in the 21st century! Not only have they mastered the various aspects of the various styles from that period but they also bring some originality as a bonus.
Some may still say that it is on the edge of being derivative (what music isn’t in some way?) but they have a natural feel for what they play and some of the instrumentation is quite inventive, with that added bonus of some very good original songs. There is a distinct lack of drums on most of the songs and pedal steel is only used on one track, almost qualifying them as a ‘string band,’ but one that plays and sings in a countryish rock style, thus adding more credibility to my ‘originality’ claims! Not everything works perfectly but credit them for trying different elements. On a couple of songs the lead vocals didn’t seem quite right and on another couple the vocals seemed a little deep in the mix,  but there is always a saving grace such as the instrumentation having a different feel or the tremendous harmonies easing out every little nit pick.
The songs themselves cover various aspects of life relating to the downtrodden including lost love, even including geography lessons with the excellent San Francisco Morning namechecking San Francisco, Austin, New York and Paris whilst another, the mandolin driven Rolling Down the Road is set in pubs in and around Belfast, yet still fitting easily under the ‘country rock’ banner. The scene is set for something just a little different with album opener, the unusual and melodic instrumental Skunk River Rag with amongst other things some lovely banjo sounds, which is then followed by the albums title track New Adventures, nice mellow sounding country rock with excellent vocals and gorgeous harmonies and jangling guitars making it slightly reminiscent of the Byrds. A slight criticism of this song is that the lead vocals seemed a little far back in the mix and the instrumentation a little ‘busy’ but still a good song. My first impression of Blame it on me, was that it had a similar feel to a band such as ‘Goose Creek Symphony’ and several other early country rock bands with its excellent acoustic instrumentation that includes fiddle and banjo and slightly edgy vocals almost making it defineable as ‘Appalachian country rock!’ Same Old Lie struck me as being a real throwback to the days of Gram Parsons, with its classic country rock sound and vocals similar to Parsons, straining but full of emotion and commitment.
It would be easy to describe every one of the fourteen songs in such glowing terms, but hopefully the point has been made about this excellent album. Probably labeling this album as ‘country rock’ is a little deceptive. Certainly that generic term is where its foundations lie but there is so much more to the music of this tremendously talented trio that I now understand, is in the process of becoming a foursome!