Ziggy Moonshine and the Bootleggers –
Music in the key of Z 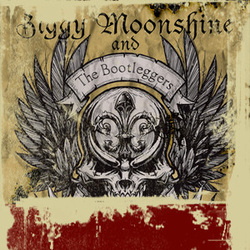 This is a pretty good album, that whilst it may not be overflowing with originality, none the less does show great experise in fitting roots rock, blues and country in fairly equal measures, into an always entertaining listening experience. They get a big sound, especially considering they are only a trio, made up of three ‘seasoned’ professional musicians. Ziggy writes virtually all of the songs, plays guitar and lead vocals, with Larry McCoy on drums and Eric Smith on lead guitar. Whilst Ziggy doesn’t have a huge variety to his vocal tones he does have plenty of power and character, imbuing most of his songs with a decent intensity and believability and all three of them really are excellent musicians.
The album kicks off with a decent chugging mid tempo roots rocker, 22 days, that hardly re-writes the book, but is better than that dished up by many better known bands. Similarly Get Away and songs like Gypsy lullaby, Pins and needles and Wrapped Around Your Finger that veer a little closer to blues rock, are all decent but what gives them a lift is the guitar playing of Eric Smith and the power ofZiggy’s singing despite not being particularly memorable songs. The raw roots rock, with elements of country and blues of Bullet In My Gun and the slower, almost country rock, of Whiskey Lies are far stronger songs that linger in the memory as is the excellent Thin Line. This is a mid tempo bluesy song that  benefits from showing a lot more restraint and with it’s instrumentation being acoustic guitar, bass and tom toms comes across as almost laid back.
Ultimately, whilst not being truly outstanding, there is some diversity of styles on this album, although it is a fact that despite the incredibly high standard of the playing the more they delve into the ‘blues rock’ strands the less memorable the songs seem to be. Despite this it is an entertaining, never boring listen that depending on which direction they choose, promises much for the future.