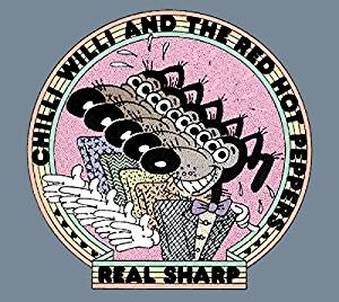 I rarely review compilations but there have to sometimes be exceptions to rules and Chilli Willi & the Red Hot Peppers are (or were) most definitely an exceptional band. Finally, decades later than it should have been, they have been given the 'box set' treatment they deserved. (It's only two discs but they didn't make many albums!)It seems (and indeed is) a lifetime ago that I saw them perform during their Pub rock heyday and listening to these two discs is a tremendous reminder of the varied sounds and the incredible inventiveness of their music that had its heyday more than four decades ago. I've always felt they were England's answer to the mighty New Riders of the Purple Sage, a comparison that has paled a little but it's a long time since I played a Chilli Willi album. For what it's worth it will never be this long again because although some of the songs have a slightly dated feel most have aged well and this collection is a wonderful example of their natural flair for sounds rooted in country music. That shouldn't really be surprising because they were an extraordinarily gifted band who developed their own natural flair and style within classic 'country rock' that was never sanitized, unlike some of the American bands of the time who sold millions of records, and despite often wondrous harmonies and gorgeous melodies the Chilli's music was always challenging and highly skilled.
The two 'main men' were Phil "Snakefinger" Lithman and Martin Stone, with a series of musicians such as various members of Brinsley Schwartz, including Nick Lowe, helping out alongside Pete Thomas, Paul "Dice Man" Bailey and Paul "Bassman" Riley. All had varied musical careers, much too lengthy to go into here, and played with some well known bands but sadly Lithman and Stone are no longer with us, Lithman succumbing to a heart attack many years ago whilst Stone passed away in late 2016, but this is an incredible tribute to those two hugely talented and colourful characters.
The Chilli Willi's were not really a 'Pub Rock' band despite working in and around that scene; in fact it's difficult to define a term that covered so many American roots genres. They are sometimes described as an 'Americana' band but a much more accurate description would be 'country rock,' a genre of which they were certainly the best purveyors in this country, in fact, had they been U.S based they would no doubt have been said to be one of the best ever. As is the case with the already mentioned New Riders, there is a 'joyousness' to everything on this compilation that will make it difficult for anyone hearing the tremendously uplifting music to feel low.
Most of their songs were written by Lithman or a combination of Lithman and Stone, although they were quite happy to tackle the work of other writers including going back to some old traditional songs. Their lead vocals were always excellent as were their harmonies, with some tremendous playing and arrangements that included fiddle, mandolin, banjo and much else, all played in an easy rolling and perfectly natural country rock style, albeit one that often captured that appealing old 'hillbilly' sense of 'ramshackleness.'
Not only are their two albums, 'Kings of the Robot Rhythm' and 'Bongos over Balham' collected here but there are also numerous demos and live tracks on this generous forty four tracks spread over two discs compilation, as well as a 24 page booklet that will be useful for the uninitiated.
I would be surprised if anyone hearing this tremendous collection were not captivated by one of the best unsung bands of their time, or any other time if it comes to that! I suspect that this is a double album that will not stray far from my home stereo for a very long time, if ever!