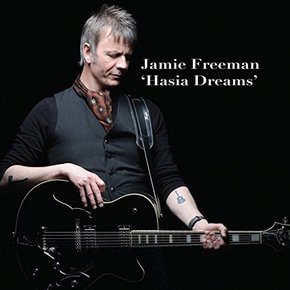 Jamie Freeman is a singer, songwriter, guitarist and drummer and, as well as being a record producer and along with wife Stevie, a promoter of live shows and owner of Union Music Store in Lewes, Sussex, oh and they also run a record company of the same name. I think that covers most of what he does so it's fortunate that not only does he have a lifelong love of music but he is very good at it as well; this tremendous e.p being proof of that along with his previous Jamie Freeman Agreement albums.
It's probably as well to add that you don't have to just take my word for his talents; there is a long and ever expanding list of roots musicians who have been happy to work with Jamie over the years, although I won't mention them all here! The ones I will mention though are his co writers on the five tremendous songs on this recording. Three of them were composed with talented Kentuckian poet, Amy Tudor, one with Doug and Telisha Williams, also known as The Wild Ponies, a band who made one of the best albums of 2017 and there was one song Jamie wrote on his own. So, quite a mixed input on the songs, which goes some way to explaining the rich diversity of stylistic influences, all of them tied together by Jamie's warm, expressive vocal style. It's also worth mentioning some of the musicians involved as well, two of them being the above mentioned Doug and Telisha Williams as well as Rebecca and Megan Lovell (Larkin Poe) who also helped out on a couple of tracks. Whilst the songs are generically unspecific there are certainly echoes of classic country rock, a little psychedia, pop rock, even an occasional folksiness, but it is very much a song driven mini album (or is it e.p?) that bows to no particular style, instead choosing to let the lyrics do the talking (and talk they most certainly do!) whilst using whatever instrumentation Jamie thought necessary to get the best out of the songs. To say he achieved his goal is an understatement.
The recording opens with the excellent title track Hasia dreams, a song that contains a little edge of psychedelia on the intro that gradually becomes prevalent throughout the whole of this excellent song, with some beautiful harmonies, courtesy of Lucy Powell (Los Feliz), linking with Jamie's dominant lead vocal, adding depth to a tremendous song. The chiming guitar and the slightly out of time percussion and bass, along with minimal effects emphasize the psychedelic element on an otherworldly story. The atmosphere of the outro actually reminded me of a song such as Being for the benefit of Mr. Kite, although on reflection and with further listening sessions that is less so! There is a slow, moody intro to Rum and smoke, an incredibly poignant story song that in so many ways, completely coincidentally, echoes my long gone past as it probably does that of many others who lost a parent at a very young age. The song has a powerful musical feel with Doug Williams Telecaster adding further depth to this emotional tale that recounts familial tragedy, lifted by a strong melody that makes this epic composition required listening for any music lovers. I don't know if this is autobiographical for Jamie but it is certainly an incredibly perceptive tale that all too many will relate to for a variety of reasons. The percussive handclaps and a cappela vocals intro on Wedding ring and a new tattoo have a 1950s rock 'n' roll feel and as this chunky song takes off with guitar, bass, percussion and excellent harmony vocals little happens to dispel that comparison, although the 21st century production and developments gradually seep through and into the listeners psyche.
I've known Jamie's music for a few years now and whilst I enjoyed his previous recordings, despite the brevity I actually think this disc is his best yet, containing some great songs that tell real stories allied to melodies that will be the envy of most musicians who hear them. The icing on this tasty cake is the fact that it is quite easy to keep the disc on repeat play thanks to the unpredictability of the stylistic leanings and the varied nuances of both lyrics and melodies. Add Jamie's excellent vocals, production and the support of his 'co workers' on the recording and I suspect he and most other musicians will find it very difficult to top this excellent recording!