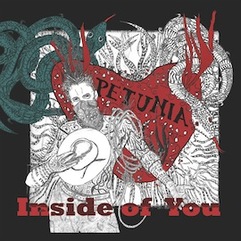 Petunia – Inside of you
Extraordinary album that equals the career defining ‘Petunia and the Vipers’ in quality. There is really no one that Petunia can be compared to, but with his country roots embedded solidly he explores his own imagination with some great songs and arrangements that are not always countrified, and of course there is also that unique vocal style. Great album!
http://www.petuniamusic.com/
Full review to follow


The Greenbeans
An album that veers from sunshine pop to folk rock to rootsy hillbilliness and on to alt. country then deep into a folksy brew, but all done beautifully. A talented duo of excellent vocalists and although the ‘sunshine pop’ is not my cup of tea it is done incredibly well and the songs that have elements of folk and hillbilly are excellent. Diversity is always to be applauded but I can’t help thinking they are perhaps trying to cover too broad a canvas. I’m pretty sure that if they settle on an individual style they have the talent to succeed whichever direction they choose to go in.
https://www.facebook.com/thegreenbeans?fref=ts

Ben Rogers – Lost Stories: Volume 1
Tremendous album of dark folk with little more that acoustic guitar and Rogers raw smokey vocals that fit perfectly with his extraordinary storytelling. It’s no exaggeration to say that the quality of this album is such that Tom House or even John Prine would be proud to have made this recording. Although listed as ‘folk’ there are rudiments of blues and country fused into the quite addictive mix. One of those albums that the more it’s played the more it reveals.
http://benrogersmusic.tumblr.com/home
Full review may follow

Melissa Ruth and the Likely Stories – Riding mercury
This is a tremendous album, at least the equal of their previous, ‘Ain’t No Whiskey,’ which received a 4.5 star rating when I reviewed that. This album has the quality and balance of albums by artists such as Steely Dan, although sounding nothing like them. Having said that, their style is just as generically indeterminate as the Dans and Melissa’s beautiful expressive vocals have a much broader scope than Donald Fagen’s! Excellent songs, beautifully sung and expertly played with the influenes and comparisons ranging through country, blues, jazz but not stopping there! Pretty much an essential purchase for anyone who loves ‘real music.’
http://melissaruthmusic.com/
Full review to follow

The Henry Brothers – Dark Waters
Tremendous follow up to the equally dark and excellent ‘Death is only a dream.’ This duo’s influences are just about every brother act from the 1920s onwards and unlike mere copyists they do bring a modern day slant to their mainly traditional songs. Mark plays a beautiful resonator guitar whilst Graham plays double bass and their harmonies are a genuine throwback to times long gone. Saw them at last weekends Maverick Festival and it’s good to report they have as much quality live as they do in the studio.
http://www.thehenrybrothers.net/
Full review may follow

Three Times Bad – American Sojourn
Terrific old timey, hillbilly and even a vaudevillian feel at times on this excellent debut from a talented and authentic four piece ‘hillbilly’ band from San Francisco. They play their own modern day songs in the old style and with a terrific amount of fire, passion and exuberance with no shortage of skill!
http://threetimesbad.com/
Full review to follow

Wagons – Acid rain and sugar cane
Raw, powerful lead vocals on a ‘roots rock album’ that has at times a just about detectable country edge, but this Australian bands style is really not much like anyone elses. Their powerful sound and ‘rock’ guitars has more in common with straight rock or perhaps the edgier side of ‘Southern rock.’ This is the first album in their six album career that I’ve heard and whilst not exactly my ‘cup of tea’ it is a very good album that deserves to be heard by more listeners. Definitely a band that I’ll be watching out for in future.
http://www.wagonsmusic.com/

Harry Dean Stanton – Partly Fiction
An intimate recording that turns some diverse if well known songs from various  musical styles into what is basically a blues album, but it does work! Harry is 88 now and in fine voice creating a lovely warm atmosphere in part due to his  between songs chat.
http://www.harrydeanstanton.org/


Appalucia (2011)
Incredible album of raw punked up ‘hillbilly’ that has been updated for the 21st century. If this was 100 years ago Appalucia could well have been a benchmark for those who followed. The rawness is impressive but so is the melodicism. Tremendous album!
http://www.reverbnation.com/appalucia


Warren G Hardings – Get a life
If the band had stuck to basic bluegrass this album would be as good as but no better than many other top notch bluegrass bands. Fortunately they don’t follow the standard template,sometimes bringing an old timey attitude to their excellent songs. The vocalists are strong, as is the playing and the harmonies but their music, in much the same way as the Old Crow Medicine Show, is full of drive and zest!
http://www.thewarrenghardings.com/


Foddershock – Black lung & white lightnin’ (2003)
A tremendous modern day ‘hillbilly’ band who have genuinely updated the old traditional style with their own songs, sometimes using modern electric instrumentation at other times all acoustic as per the songs requirements. The vocals are raw but evocative and everything about this tremendous band screams originality and a fiery passion. They are now eight albums into their career and whilst those albums are incredibly difficult to get hold of, if you manage it the eerie often sinister music is hugely rewarding.  Currently ‘my new favourite band!’
http://www.reverbnation.com/foddershock

Old Crow Medicine Show – Remedy
Yet another great album to add to the list of ‘hillbilly’/country brilliance that roots fans have become used to from this supreme band. Virtuosic playing, atmospheric high quality vocals, incredible harmonies, great songs and an old timey atmosphere that few if any can even get near matching. If you want to start a collection of music in this genre the definition starts here, or on any of their previous albums! I long to hear a better album than this in what’s left of 2014 but fear that is very unlikely.
http://www.crowmedicine.com/

Trampled by Turtles – Wild Animals
Their usual excellent playing, lead and harmony vocals seem to have taken on an even more haunting high lonesome feel than usual. They are a band that only the lazy would categorize as bluegrass, bringing a twist to that genre, as well as folksy old timey, that sets them apart from many of their peers, eventually making them almost impossible to pin a label to. This is quieter, more restained and folksier than usual and for me, not their best album but ultimately anything by Trampled by Turtles repays many listening sessions with interest!
http://trampledbyturtles.com/

Willie Watson – Folk singer, vol. 1
A real mixed bag of old timey, blues and folk songs with just his acoustic guitar or banjo for company on this solo debut from the Old Crow Medicine Show man. His vocal style has a real ‘old timey’ feel to it which perfectly suits these songs that even in their original form have rarely if ever been bettered. If you have a love for edgy, sparse roots music you will not find a better album this year, or most other years this century. Superb and heartfelt.
http://www.williewatson.com/

The Brummy Brothers – On Our Way
This is a good album that, unusually, seems to blend various acoustic strands including bluegrass, old timey and folk with a jam band sensibility, even including a little comedy. It doesn’t always work and sometimes seems to be lacking a little in direction, although there is huge promise with two good vocalists, expert playing and some very good ideas.
http://thebrummybrothers.com/

Blue Moon Marquee – Lonesome Ghosts
A really good album that despite clocking in at less than half an hour is easy to play over and over again thus elongating it! Some expert playing by a duo that blend blues, jazz and even a little gypsy jazziness on a sparse album, but with A.W.Cardinals tremendous vocals often echoing a melodic young Tom Waits.
http://awcardinal.bandcamp.com/
Will get the full review treatment soon.