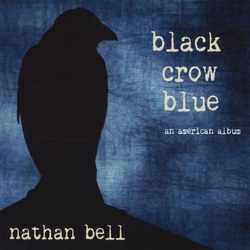 This is an unusual album that follows the thread of the unglamorous and underprivileged through their lives, interspersed with thematic references to ‘Crow’ as he travels through his life until his ultimate sad ending. The sparse instrumentation perfectly complements Bell’s world weary husky vocals on these stripped down to basics songs about life's travails, added to which the sympathetic production gives plenty of clarity and space to the lyrics. He inhabits similar territory to Townes van Zandt and John Prine, but is even nearer to Guy Clark with his deceptively mellow style that has an intimate, almost introverted feel. Most of the songs move at a snails pace, with very little instrumentation enabling the stories to have a bigger impact on the listener. The acoustic guitar is always there, often accompanied by a haunting harmonica, bass, occasional dobro and mandolin, none of them ever detracting from the story that is being depicted.
There are four songs on the album on which Crow is in the song title. The album opener and scene setter is American Crow, we then meander our way for a few more tracks until we get to Crow in Oklahoma, when it is revealed that he is in fact a native American down on his luck in Oklahoma and starting his journey to the west coast. A few more tracks pass and we reach Black Crow Blue and eventually on the second from last track Crows death as an old man in a car wreck on Wherein Crow. The strange thing is that whereas Crow can be looked on as supplementary to the main story he could just as easily be analogous to the character, signalling the different changes and aspects of life as we travel through it. Yes, I know, it’s getting deep and unfathomable, but the beauty of the album is that you can unravel meanings that the writer may never have intended or you can just enjoy these excellent songs on their own individual merits. I can recommend either, such is the strength of the songs.
Me and Larry has the lovely sound of a dobro on a slow moody song about friends growing old and is given a haunting feel by the addition of a beautifully restrained harmonica. This is followed by the powerfully descriptive and harrowing Stone’s Throw a song with a fuller sound than the preceding, almost reaching mid tempo, and is a tale of  poverty and a mans fight to keep his family afloat and retain some pride in attempting to do so. Red and White is a thinly veiled kick against racism, again using native Americans as the main characters and telling a story of mistreatment and when we eventually reach the albums closer We all get gone, we hear a depiction of the mans acceptance of mortality.
Being able to interpret an album in many ways probably doesn’t apply to too many albums that have been released over the years but this one certainly has that feeling about it. Even if i’m wrong about that, it must signal the power of the songs, that whilst I listen to hundreds of new albums each year this one actually has the power to draw me in and ensure i get lost in my own rhetoric!