SARAH JANE SCOUTEN -
WHEN THE BLOOM FALLS FROM THE ROSE 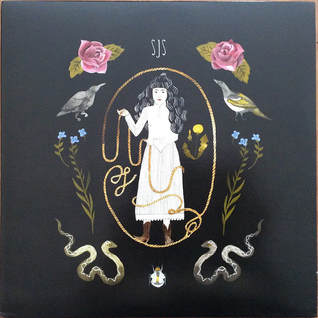 Sarah Jane Scouten hails from Bowen Island, British Columbia and is a hugely talented singer songwriter who with this, her third full length album, has released a collection that could very well define her career and eventually be looked back on as a true classic. Her voice is not only beautiful, but also has an incredibly manipulative quality and the ability to evoke whatever her well written lyrics require. It is a similar quality to that possessed by top artists such as Emmylou Harris, in fact, even that comparison doesn't necessarily flatter Sarah who is actually a better songwriter than Emmylou. With her incredible vocals she is able to evoke a sad vulnerable heartbroken figure and then change to a strong upbeat sassy lady not to be messed with, but always with a beautiful femininity
Sarah's ability to come up with memorable melodies has rarely been surpassed by anyone and her lyrics are insightful and sometimes hard hitting on songs that range from gentle, if heart rending, country ballads to an upbeat, up tempo country that can virtually be considered country rock. She may then slip seamlessly into a much more folksy style; in a nut shell this is a lady who has a complete command of country and folk music but with her own individual take that draws from myriad influences and styles. It is the ability to portray a range of emotions in a completely believable way that helps set her apart.
Ten of the twelve songs were written by Sarah, the exceptions being Paddy Graber's Britannia mine and Jasper Adams Where the ghost river flows and the recording was superbly produced by Andre Wahl at Revolution Recording, Toronto, Ontario. Sarah Jane handles all lead vocals and acoustic guitar, James McEleny plays bass and backing vocals, Robbie Grunwald on Keyboards, piano and accordion, Nichol Robertson played electric and acoustic guitars as well as banjo, Chris Stringer also played electric and acoustic guitars and Sly Juhas on drums and percussion. These were further supplemented by Ben Plotnick on fiddle, Aaron Goldstein on pedal steel guitar, John David Williams on clarinet and Anna Scouten on backup vocals and despite the longish list the sound is never over dense.
Stylistically the album revolves around country music but with so many variations that include a haunting 'high lonesomeness,' occasionally a 1950s country and western feel, haunting balladry and up tempo sassiness, all carried out with great believability. I found myself on most of those variations thinking how nice it would be if she made an album in whatever style that particular song was in, although her distinctive voice pulls everything together, giving the album a lovely varied flow.
Percussion and melodic guitar get the album opener Acre of shells  started before Sarah's beautiful vocal takes over on a gorgeous ballad on which, having lost a lover and despite other opportunities, she still can't get him out of her mind. The weeping steel guitar and harmonies give a lovely texture to the song with a deep twangy guitar eventually entering on this most gorgeous of country ballads.  Every song I sing is led by a gentle twangy guitar and steel guitar with a deep bass and restrained percussion on another beautiful country ballad, with Sarah's voice having a slight tremor in it adding to the already huge appeal. A rolling piano gets in on the act adding yet more texture on a great song that Dolly missed! On Poland there is a gentle start with percussion and steel guitar soon joined by Sarah's haunting vocal on a song that has an incredibly epic atmosphere. The harmonies are gorgeous and the slight echo deepens the atmosphere on a heart rending ballad that puts into words her feelings about a lover who is no longer around. There are little snippets that give some idea of the depth of feeling throughout the song that lets the listener know the heartbreak the subject is suffering. That is followed by Jasper Adams Where the ghost river flows, an upbeat up tempo country song that includes an edge that veers towards rock.  Again, it is a tale of lost love and at first appears to be a simple song until the power builds and the instrumentation fills out. The percussive thud is a perfect contrast to Sarah's beautiful vocals with chiming guitars and lovely sympathetic harmonies raising the power, eventually including a nice fiddle intervention, although despite the weight of the instrumentation her vocals are always to the fore. Finally, there is a nice slow moody twangy guitar with keyboards in the background on Man in love, a song on which Sarah's lead vocal and the harmony vocals give this beautiful country song a 1950s feel. The deep throbbing bass felt a little heavy but the steel guitar and fiddle give more depth to the emotional content of a song on which her only alternative to a life of misery is to leave her man.
This is a tremendous album by a great talent who deserves to be heard by the music buying masses. If she is, I don't see any way this lady can fail, so buy the album and then if you live in the U.K check her website because Sarah is on tour here from early October and I know that when you hear this recording you will want to see her live!