THE TILLERS – HAND ON THE PLOW 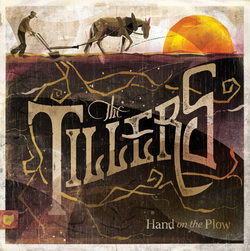 
The Tillers may well be the best band you’ve never heard of, certainly in Britain anyway. I’ve only recently got into their music courtesy of an online store, with the four albums that preceded this
tremendous recording (one of which is a live album) being of such astounding musical quality that I still can’t believe I had never heard of them until now. This really is an album I can’t stop playing. It’s not just that more little nuances reveal themselves with each play, in fact the main reason is that it appeals to me in a way that is difficult to define. It just seems to soak into the senses and draw you into the hugely atmospheric ‘old timey’ world that this incredibly talented trio’s music evokes. There is something almost primeval in it’s appeal that can’t be explained. It is simply an album that I will in all probability always return to because of the atmosphere it creates and the emotions it stirs. In a nutshell, a perfect album for me and I suspect, for many others!
The Tillers are as much about the tremendous atmosphere they create, as they are about musical quality,
despite that quality being almost unsurpassable. In fact, I’ve found it easy to put them on the same pedestal as the Sumner Brothers and Good Luck Thrift Store Outfit, two bands that for me are the epitome of real country music. They could even prove to be the seminal band that bridges the gap between the old time hillbilly recordings of eight or nine decades ago and the spate of tremendous modern day bands that follow the same muse. Their music is still developing, with this album containing all band originals of huge quality and of course the fact that they include two excellent lead vocalists with differing styles certainly helps. The Tillers are multi instrumentalist Mike Oberst on vocals and banjo, Sean Geil, guitar and vocals and Aaron Geil on bass, with all hailing from Cincinatti. Often the bass is used to simply lay a solid foundation but on this album it is more forward in the mix, at times sounding like a jug used decades ago by the old time string bands. It does lay a solid foundation but ultimately is the equal of the other instruments on show, binding everything together on this generally sparse recording.
The music is raw and cutting but somehow uplifting and emotionally stirring with it’s roots in old timey, bluegrass, blues and folk, although these terms make for a rather tenuous comparison on an album that in many ways masks it’s influences with both the originality and individuality this trio are able to call on. Every song has an emotional impact, even if you don’t get all of the lyrics, pointing to the fact that the composition of each is of a high quality along with the sparse but hugely atmospheric instrumentation and the incredibly evocative lead and harmony vocals. The songs somehow evoke snippets of real life, with no beginning to the excellent  stories
and no real end, more statement of facts and reminiscences.
There is no one song on this album that defines the Tillers, thanks to the variety of tempos and emotions. Every time I think of a favourite another crops up to nudge it to one side although Willy Dear a song that somehow reminds me of both of the two already mentioned great bands is one that really stirs the emotions. It opens with an acoustic guitar, banjo and bass with a nice mournful harmonica on a just about perfect, but sad tale of death and suicide. Towards the end this tremendous song, rather than just fade away segues into the classic The girl I left behind me, with an atmospheric fiddle driving the melody. A great song, as is it’s predecessor I Gotta Move with it’s chiming mid tempo banjo, bass and guitar, accompanied by an atmospheric vocal and a spooky harmonica adding to the excellent eerie atmosphere on a tremendous dark confrontation with the Devil, but is it too late to change and seek redemption? Shanty Boat has a moody fiddle intro with bass on an excellent old time blues or hillbilly evoking duet that despite the easy going tempo is atmospherically quite dark, although about a man and his boat! It is yet another tremendous song that as with most of the compositions differs from most of the others on this album that unusually seems to encompass most of the styles that were covered in old timey music, even often including a  ‘bluesy’ feel. Can’t Be True is a slow moody country ballad with old timey banjo, guitar and bass and some nice
harmonica and harmonies on a really good lost love ballad, whereas The Road Neverending is a tremendous love song with chiming banjo and thudding bass, with evocative lead vocals and again excellent harmonies. Finally, Treehouse, is a tremendous song that really evokes a Saturday night barn dance in a ‘holler’ of old with the fiery
atmosphere driven by foot stomps and fiddle interspersed with equally atmospheric vocals.
Ultimately, I would be surprised if I and hopefully many others don’t see this as one of the best albums so far in this 21st century that in many ways has taken ‘real country music’ up a further notch. Buy the album and see what I mean, in fact buy all of their albums as well as Mike Oberst’s solo album and give your musical taste buds a treat they rarely get!