10 STRING SYMPHONY - WEIGHT OF THE WORLD
​ 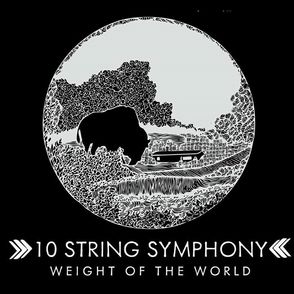 First things first! Before we get on to the c.d it is probably a good idea to tell you about the sort of skills possessed by the duo that make up '10 String Symphony.' Rachel Baiman is a songwriter, 5 string fiddler, banjoist and vocalist and Christian Sedelmeyer is also a writer, vocalist and plays 5 and 4 string violin. Rachel is a former Illinois state old time fiddle champion whilst Christian is a classically trained violinist and since his arrival in Nashville, where the couple met, has been a member of Jerry Douglas Band. So from that little lot you should start to get the picture that this pairing are no slouches when it comes to making music!
The first listen to this astonishing album not only confirmed their ability but also made me realise no one else is making music anything like theirs. I would be amazed if this remarkable album sells in any great volume but it should do because this duo have made one of the most original folk albums I've heard for a very, very  long time. The instrumentation is sparse with the 5 string violin giving it a highly unusual sound that is quite spooky, often allied to 4 string violin and banjo with these two excellent vocalists who both have a nice edginess to their vocals. Most of the lead vocals are handled by Rachel but Christian takes some leads and even their harmonies have an unusual, if appealing, sound.
The arrangements are strange, eerie and highly original and remind me of no one I can think of and if you want an album that is bright and breezy this is not the album for you, with even the less dark songs having a pervasive darkness that few others can match. Much of the dark sound can be laid at the door of the use of the violins but this couple have not set out to make a comedy record, instead choosing to see how they can manipulate and broaden the canvas of the music they feel. In many ways they are an echo of the old timers of a hundred and more years ago who were self contained in their musical world and reliant purely on their own musical instincts and with nothing superfluous added. Rachel and Christian brought in several people on a few tracks but nothing that detracts from their vision.
Not all of the songs are lyrically dark and there are some light touches, as in their highly original take on the traditional Black Eyed Suzie that displays a lovely lightness of touch and a quite uplifting atmosphere. Rachel either wrote in their entirety or co wrote six of the ten songs, one is written by Christian and Joshua Britt and on another Christian co wrote with Rachel. There is one, already mentioned, traditional song, one by the late John Hartford and one by Bob Dylan. The first few bars of the first track are a warning to listeners that any comedic element on this recording is unlikely, with an incredibly mournful violin start soon joined by banjo and Rachel's lead vocal, with Christian on harmony on a song that is modern but could just as easily have been an old traditional folk song. I'm Not Lonesome has a plucked violin with Rachel on first verse, Christian on second and their unusual violin sound adding a dark spookiness to the song. On Oscar's Verdict Rachel's lovely vocal is accompanied by a 'choppy' violin and banjo on another of her excellent compositions. Again, Christian is on harmonies and the violin sounds incredibly spooky, as does most of the song on this nightmarish story. Last but not least, on the title track Weight Of The World we are treated to a banjo opening on a song that I could easily imagine Welch/Rawlings performing, with the violin coming in late on a tremendous duet.
To sum up; if you like music that is highly unusual this album will certainly suit you; if you like music that is both excellent and highly unusual you will not find better than this tremendous recording.