THE CARPER FAMILY – BACK WHEN 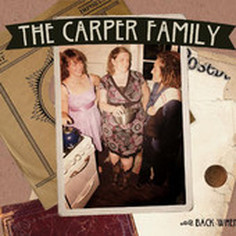 When I first heard of this tremendously talented trio of Austin based young women I thought the band name was a clever word play reference to the Carter Family. I’m pleased to say it wasn’t and am even more pleased that they have a lot more in common with the music of the Carters era than some of the ‘country pop’ that has been churned out over the last four or five decades. The band consists of Melissa Carper on bass and vocals, Beth Chrisman on fiddle and vocals and Jenn Miori also contributes vocals and guitar. They are helped out on this album by Brennen Leigh as well as the incredible mastery of five times Grammy winner, Cindy Cashdollar on steel guitar and dobro.
This is their second album, the first being last years just as good, and still available, ‘Come see yer ol’ daddy’. The talented trio are all excellent vocalists, ranging from a purity in many ways similar to Dolly Parton to the more edgy sound that is slightly reminiscent of people such as Sara Carter. Although the vocals are always outstanding they are never cloyingly sweet but seem to always contain a slight but difficult to define edge. Maybe it is just attitude but whatever it is it works brilliantly, with its slightly untutored feel lifting the album way above the pack. All three are also very good instrumentalists with Melissa Carps on double bass showing a lot of versatility, being as evident in the mix as fiddle and guitar, consequently giving the album a slightly different but beneficial balance when compared to their ‘competitors.’
The songs on the album really cover the whole range of styles within country music, from cowboy ballads to western swing, a little old time and even containing a little alt. country edge at times. They blend some of their own original compositions with songs written by a number of country songwriters from various areas and eras of country music, even including on this album a beautiful rendition of Gene Autry’s Can’t Shake The Sands Of Texas From My Shoes. Despite being a modern trio they are still able to imbue the song with the feel of an old time western cowboy ballad with their excellent instrumentation and vocals and evocatively edgy harmonies on a song that tells of homesickness for Texas. My Baby Don’t like Me has more of a western swing feel with gorgeous harmonies and the beautiful sounds of steel guitar and fiddle. The lead vocal, as in the case of several other songs, sounds like a young sassy warbling Dolly Parton but with a little little less purity, giving added strength to the song. There are several lovely ballads, all bringing out the strength of the song and vocalist, rather than the sugary feel that many in Nashville might have been tempted to apply. There is an ‘old time’ up tempo front porch harmony song with fiddle and a genuinely edgy feel in the classic Montana Cowboy and even some gorgeous yodelling on the beautiful slow fiddle and mandolin driven cowboy tale, There’s A Rainbow On The Rio Colorado.
This is an album that, despite including fifteen songs, has no filler, with each and every track being worthy of inclusion. Even though the lead vocals and harmonies are beautiful this excellent trio still manage to maintain a slight edginess to each song, thus avoiding the descent into ‘country pop.’ It’s a shame that many people seem to go for the bland side of country music, they really don’t know what they are missing when a true country album contains the variety and quality that the Carper Family has an abundance of.