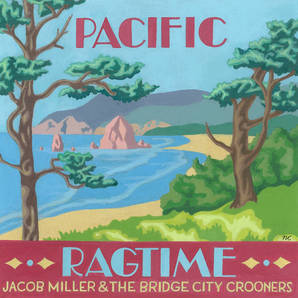 Ragtime, jazz, western swing, country, with plenty of blues and even 'old timey' leaking into the mix was my basic description of this tremendous album after the first listening session. There have been many sessions since and whilst that basic description is fairly accurate the sound is more expansive than suggested. None of those styles are dominant but in listening to the twelve songs the overall impression is one of originality, thanks to the smooth blend of styles. That is not to say the album is 'smooth;' it has a spikiness and character of its own that should appeal to most tastes unless you are a lover of 'death metal' in which case why are you reading this?
The band consists of Jacob Miller, fairly obviously, and he handles lead vocals with his unusual, but warm and expressive voice to the fore as well as playing 1947 Epiphone archtop guitar and kazoo. James Ramey plays a 1923 Vega tubaphone #9 plectrum banjo and a 1926 Lange Challenger tenor banjo as well as backup vocals. Nate Lown, King llB trombone and backup vocals, Leon Cotter is on clarinet, saxophone and vocals, Ben Hampton on drums and percussion and Mike Team plays upright bass. Also making contributions were Ian Miller on pedal steel guitar, Garner Pruitt, trumpet and Ethan Maier on piano. If you are wondering where the album title comes from 'Pacific Ragtime' is the way the band define their sound and I think anyone who has ever heard them would find it difficult to argue with that definition. They are based in Portland, Oregon, where the album was recorded, mixed and mastered at Interlace Audio Studios. With the exception of Sammy Kahns Love me or leave me and Jean Braun's I helped to mend (your broken heart) all of the lyrics, music and arrangements were written by Jacob Miller.
The songs have a feeling of lyrical simplicity and yet they are not really. It is probably the clarity of Jacob's vocal performances and the way he expresses those lyrics that gives that feeling but that is also allied to some incredibly complex and highly skilled arrangements that few can match, much less surpass. The same applies to the variety of styles and yet all come together in a way that gives this singer and band their own recognizable style thanks in part to the clean freshness and vitality and an enveloping warmth, none of which ever leave the album however many times you listen to it.
The album kicks off with I'mona wait, with a guitar and mandolin intro before being joined by Jacob Miller's warm expressive vocal, followed by trumpet, sax, and trombone to create an old New Orleans feel with the eventual inclusion of a bass clarinet, still with the mandolin chugging away in the background all combining to make this a song built on various hues of 'colour.' Trouble in paradise is a lovely warm song that veers close to 'western swing,' and includes in its makeup a lovely steel guitar, 1940s harmonies, chugging guitars, percussion and bass that meld together giving the song an easy going atmosphere. That is followed by Gotta keep keepin' on, a composition that includes a lovely guitar intro that is soon joined by trombone, percussion and banjo with Jacob's vocal expanding the upbeat atmosphere that includes an excellent trombone break midway joined by bass and clarinet solo's, all expertly played but adding to rather than interfering with the songs texture. Dream has a much more mournful sound on another excellent song that has a variety of sounds from choppy percussion, probably the most fluid vocals from Jacob on the whole album, a flowing brass and an appealing smoothness. Love me or leave me is a song on which Jacob's vocal is again at its expressive best, with the rest of the band providing the instrumentation and variety that takes this song from ragtime to jazz and on into an indeterminate style that has a little bluesiness and a 'chugging' foundation. The final song on the album is Spin that record, an excellent upbeat rock 'n' roller that adds yet another stylistic string to the bow of this tremendous band, with excellent lead and harmony vocals, brass, bass and percussion driving the song on and some excellent guitar work on a throwback to the 1950s Rock 'n' Roll heyday and providing a hugely entertaining close to this twelve song recording of real quality!
Despite the easy going nature of much of the sound and songs this is an album that can certainly not be bracketed with 'easy listening.' The tremendous and often virtuosic playing is also accompanied by an incredible flair in the arrangements and with all of those earlier mentioned stylistic snippets included it can almost be termed a challenging album in terms of those arrangements. Overall, despite an occasional mournfulness, I defy anyone to listen to this excellent collection and not feel more upbeat than they were before pressing the play button!