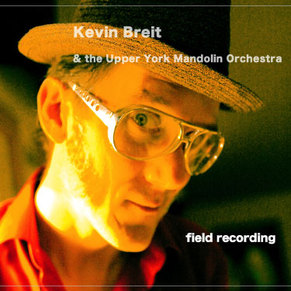 Never one to plough the same musical furrow this is quite a departure even for someone with the versatility of Kevin Breit. He is often described as a blues or even a jazz player but the  fact of the matter is that there are very few musicians more suited to the American Roots label than he, simply because you can add folk, country or just about any other sub genre to his list of styles. His expressive vocals are at times not too dissimilar to someone such as Elvis Costello, but perhaps a little warmer and more fluid. Recently he has made several albums with the much
travelled, musically as well as physically, Harry Manx, another man (and fellow Canadian) whose musical horizons are without
limit, as well as continuing on his jazz/roots rock way with The Sisters Euclid.
As to the instrumentation, the name of the band is an unsubtle hint! There are six mandolin players, four
on mandola and three mandocellos plus a double bass and Breit on lead vocals. They are no mere ‘backing band’ either, having a rich history that dates back to 1909 and it was Breit, a fan of their musical style who suggested this project to them. In other hands the sound could well have been monotonous but Breit and band along with producer Thomas Dooley III, get every little bit of variation in sound out of the instruments without having to process anything, such is the expertise on display on these eleven diverse Breit penned songs that contain varied tempos and  themes.
The album itself is certainly quirky, as you would expect with this setup, but there is also a strong musicality that enables it to stand as a rootsy album in it’s own right, albeit different to most of what can be expected from that genre. There is a feeling of, if not exactly comedy, a lighthearted element that blends well with the musical expertise on display to produce an entertaining and highly listenable recording.
The songs themselves are very genre unspecific, except for the already quoted ‘roots music,’ but at times
there is an oriental feel  that then resolves itself into a European setting and before you know it you are back on the North American continent with a taste of folk, blues and even an echo of country! For me the best song on the album is the beautiful duet ballad, Nothing About Us, on which Breit’s sister, Sue’s gorgeous emotional vocal stands out, but most songs on this album are if not always great, certainly full of interest with the title track Field recording and album closer Bring Me Down being excellent. In between, songs such as Johnny Dollar, Boom Chicka Boom and King Kong Strut amongst others ensure the entertainment and musical versatility never slackens.