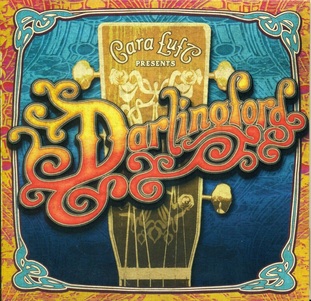 Three albums, culminating with this tremendous recording, serve to show just why the Wailin’ Jennys were
and still are such an amazing band. Cara is the third of the five current and past members to release a new solo album this year,(each of the other two serving members also having released solo work in the past) with each one being
not only a work of great beauty but also with an inherent strength of character that sets each apart from most other folk albums. This is Cara’s third solo album in the last twelve years, fairly obviously some of those years having been
spent with the Jennys, and what an excellent piece of work it is. Generically this c.d. sits very firmly in the ‘folk’ music racks, but contains variations on this style that stretch the boundaries to their outer extremes and is very much
a disc full of darkness but with glimmers of light and a natural sense of drama in every song.
Of the songs nine were either written solely, or in partnership with others, by Cara, (five with Lewis Melville)one by Mike Scott, two traditional and a tremendous version of Derroll Adams’ classic Portland Town.’ Cara’s own intensely personal songs virtually define a singer songwriter ‘baring her heart and soul’ with several relating to the ending of her relationship with her ‘life-mate.’ The live bonus track also relates to a recent misfortune but thanks to her quite overwhelming optimism, humour is brought to the incident. That song is called Charge and relates to marijuana being found in her car at a border crossing. Fortunately the prosecutor appreciated her take on the situation when hearing of the song and dropped the charges. This serves to explain her hugely appealing
attitude and openness over any situation that may arise, allowing her to put thoughts about events into words no matter what upset she has suffered and all done with an appealing honesty that few other songwriters can match.
Cara recorded the album at various locations, including Darlingford’s United church from whence comes the albums title, whilst many of the musicians who helped her out recorded at locations around the planet. She is a highly skilled acoustic guitar and banjo player and her vocals are not only beautiful but also full of character and able to evoke whatever emotion the song requires. Andrew Downing plays upright bass on every song,  similarly
Mark Mariash on drums and percussion, with Lloyd Peterson adding lap steel, snare and Hammond on a few songs with a number of other artists of his calbre playing a variety of other instruments, although the instrumentation is never too dense, with Cara’s excellent production always ensuring the lyrics have enough space to make their impact. And ‘impact’ is exactly the impression that most of these songs make on the listener with an overriding darkness to many of the lyrics but with several songs having a realism and more than just a glimmer of light that ensures that whilst the depths may have been plumbed the way forward is now clear and optimism is starting to arrive.
Album opener Only Love Can Save Me is an incredibly dark powerful song about the power of love
and a  faith that slowly ascends into the  light, beautifully sung and played with a lovely sparse instrumentation that allows the emotions that are bound up in this tale to flow. Bring ‘Em All In includes some lovely evocative harmonies on the chorus, on a story that promotes love and forgiveness. It has quite a powerful instrumentation although one that never overwhelms this unusual song with a premise that many will think naïve, but if only ……. ! On House On Fire we get to hear her lovely banjo being played as lead instrument on an incredible song that if not true, is incredibly detailed and perceptive about someone who  loses her home in a fire and finds solace and comfort at the home of a good friend. An extraordinary song on which she seems able to dredge up the raw emotion of someone in this unenviable situation. Off My Mind is an incredibly detailed and heartfelt song that is full of darkness with barely a glimmer of light, on a tremendous mid tempo folksy roots rocker about the bitterness felt after being left behind by a lover and giving a gloomy warning to his next victim. It’s easy, if sad, to think this along with many of the songs was written from her own experiences, but the light begins to shine on It’s Gonna Be Alright. The presentation is dramtic on a lovely descriptive song, a story about someone having turned the corner following a loss and facing a new dawn with optimism and a sense of what she has rather than what has gone. So after all of the darkness the light starts to shine and long may it continue to do so on this tremendously talented  artist.
This is certainly not an ‘easy listening’ album but it is an incredibly easy album to listen to, containing as
it does a power and honesty that very few can match allied to Cara’s lovely expressive playing and vocals. Terrific album!