JUSTIN WELLS - DAWN IN THE DISTANCE 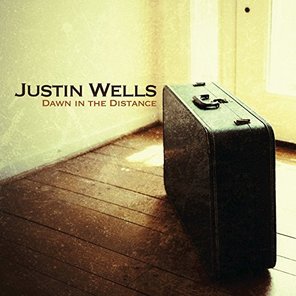 Prior to this debut solo album Kentucky native Justin Wells was the front man of the now sadly missed by their fans, which includes me, 'Fifth on the Floor' and just about the time commercial success was looking a strong possibility with 2013s excellent Shooter Jennings produced 'Ashes and Angels' the years of travelling took their toll and the band was no more. Soon after their demise Justin decided to put a plan 'B' into operation and the solo career was born. Whilst Fifth on the Floor did contain plenty of country elements many felt there was often too much going on with quite a strong 'southern rock' leaning alongside a strong 'hillbilly rock' sensibility. This album, I'm pleased to say, is much more defined by its powerful country elements allowing Justin's expressive vocals to dominate the album as they should.
Pleasingly, he doesn't sacrifice the character and believability of his work by trying to smooth off the edges of his vocal style. His voice is melodic and has a very good range but it has that hugely appealing 'whiskey soaked' rawness that says he is a complete individualist who puts everything he has into every song he sings rather than trying to sound like someone manufactured for mainstream mega sales. I'm sure he wouldn't mind too much having to cope with 'mega sales' but ultimately this is a musician and an album defined by his vision rather than accountants.
In August 2015 he went into the studio with Duane Lundy (Sturgill Simpson's 'Sunday Valley,' Joe Pug, Vandaveer) and began work on this tremendous recording. It is not as difficult to categorize as the three recordings by Fifth on the Floor, being very strong on the perfectly natural sounding 'Outlaw country' elements, still having a little of the 'punk' attitude that was in the makeup of his previous band. It's not just his vocals that have a raw edge; the same can be applied to his lyrics that have the 'realness' that is akin to life, rather than the work of a vivid imagination.
The album opens with Going down grinnin,' an exercise in rebellion that has a deep twanging intro with throbbing bass, percussion and keyboards and the eventual addition of steel guitar with Justin's attitude laden raw but melodic lead vocal supported by some angelic female harmonies. It is immediately followed by the tremendous Still no rain, with its lovely slow melodic guitar intro joined by Justin's evocative vocal and backed up by the solid percussion and bass with a lovely slide guitar break on a powerful and sad murder story. The instrumentation is restrained allowing Justin's vocal to evoke all of the raw emotions and the power of the story contained in the song.
The very first song on the album signals what awaits us with its deep twanging guitar intro, throbbing bass, percussion and keyboards to which is eventually added steel guitar and Justin's evocatively raw but melodic lead vocal and angelic female harmonies on the mid tempo Going down grinnin.' It is followed by the slower but no less evocative Still no rain with its lovely slow melodic guitar intro that is soon joined by Justin's evocative vocal. He is supported by the always solid percussion and bass on a tremendous song that includes a lovely slide guitar break on a powerful and sad murder story. The instrumentation is restrained allowing Justin's vocal to evoke all of the raw emotions contained in the song. So far away is an incredibly atmospheric song with strummed acoustic guitar, treated electric guitar, a little steel, with powerful bass and percussion and Justin's excellent lead vocal on a yearning tale of lost love. A gently strummed guitar and bass propel Three quarters gone, with Justin's vocal excellent on a sad familial tale of hardship. The song gradually builds with beautifully sensitive percussion and steel guitar as does the desperation in the songs subject. Final mention on these randomly selected songs is of Been a long time, a gorgeous ballad that includes the usual beautifully selected instrumentation on a story about spending a long time away from home and the pain it causes, with the weeping steel guitar adding to the sorrowful feeling.
For modern 'outlaw country' music this album is the complete package. The lyrics are excellent and will hold the attention of all listeners, the melodies and arrangements are inventive and memorable, with Justin's vocals as near perfect for this often dark country music as anyone's could possibly be. When you add the sheer all round dynamism and the incredibly skilful playing it is safe to say that Justin Wells, working in a similar area to Shooter Jennings, Hank III and just a few others, certainly on the evidence of this tremendous recording, has found his natural musical home.