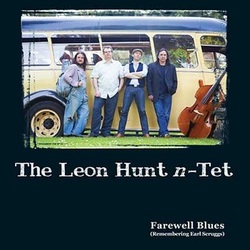 Despite being a bluegrass tribute to the late Earl Scruggs and latterly, Doc Watson, this album has a much more expansive feel than your average bluegrass album, blending blues and folksy old timey quite seamlessly into the mix. Had it been merely a pure bluegrass tribute it
wouldn’t have quite the power and impact that this blend of tremendous songs and instrumentals generates, with Leon and this core of some of Britains best ‘bluegrassers’ being as adept on a blues as they are at the ‘high lonesome sound.’ Indeed it’s albums such as this that help to explain the links between country and blues, being played and sung with the fire and passion of the originals of many decades ago, when often the only real difference between ‘race music’ and ‘hillbilly’ was the colour of the musicians skin. There are several ‘blues’ on this excellent album but they blend seamlessly with the bluegrass songs simply because many of the originators of that genre, such as Earl Scruggs, were themselves steeped in the blues, in fact quite a few of them learnt their chops from old bluesmen long since forgotten.
I generally don’t like tribute albums but two things caught my attention. One was the fact that the band is British and I was intrigued to hear what they could do with this classic music and the other was the strange band name. Apparently the ‘n’comes from the fact that mathemeticians use ‘n’ to denote a number that is liable to change and as Leons band was sometimes a trio, quartet, quintet or sextet, substituting an ‘n’ for any of these makes perfect sense! As to the question of whether a british band can get inside these songs, the answer has to be that this one certainly does! Without knowing this is a British band most listeners would never know that they were not from somewhere in the Appalachians, with their authentic feeling blend of acoustic music. On this album they are actually a quartet of four of the most talented bluegrass musicians in Britain and easily comparable to many of the
well known and high quality musicians on the U.S acoustic scene. The band is made up of Leon Hunt, who has long been known as Britains top 5 string banjoist on banjo and vocals, Jason Titley on guitar and vocals, Ben Somers on double bass and vocals and finally Joe Hymas on mandolin and vocals, a man who has played with just about everybody including Southern Tenant Folk Union and Chicken Shed Zepplin! They certainly don’t let themselves down on this recording, with some excellent interpretations of some great old songs and tunes. They are not faithful copies either; they actually play them in their own style, something else for which they should be applauded.
There isn’t too much that needs to be said about the content of the album. The two Earl Scruggs penned instrumentals are played with plenty of fire and skill, as is the tremendous version of Bill Monroe’s Pike County Breakdown, on which some of Leon’s banjo playing has to be heard to be believed. Of the songs, there is a really good high lonesome version of Jimmy Martin’s Honey You Don’t Know My Mind that gets the album of to a flying start. The traditional Deep River Blues is a really good version of an old timey/blues song with a vocal that creates a nice bluesy feeling, followed by Jesse Fullers 99 Years (and one dark day) which gets a perfectly natural sounding bluegrass treatment, with these last two songs perfectly explaining the mix and match of genres that can be performed by musicians with a feel for the music and these certainly have an abundance of that!
Despite no original songs this is still a very good album by a band of musicians who are at the top of their game and who blend and interpret some tremendous old songs and tunes.