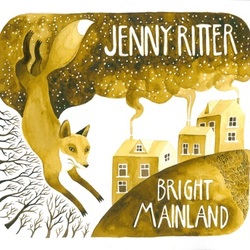 
Jenny was a founder member of the three piece, all girl, top Canadian ‘roots’ band ‘The Gruff,’ a band that worked in and around the various offshoots of country/folk music. They made four critically acclaimed albums in the ten years of their existence although this is
Jenny’s first recording of her solo career. She possesses a gorgeous feminine voice that has a huge amount of character and versatility that added to her unusual songwriting brings a lot of originality to her music.
The album has a strong Canadian country feel that is so difficult to tie down, but is often recognizably different to that of the U.S, perhaps a little more flexible and experimental? Certainly there always seems to be a lack of uniformity and a  great freshness that pervades much  of the music and song structures. Everything has a wide open spacy feel, not just in the separation of instruments and vocals but in the feel of the music, perhaps going some way towards explaining that difference.
The core band, certainly on this album are Jenny Ritter on lead vocals, acoustic and electric guitar and
banjo, Adrian Dolan, (of The Bills) bass, mandola, viola, fiddle, electric guitar, harmony vocal and Lucas Goetz, (of the Deep Dark Woods)drums, pedal steel, harmony vocals and electric guitar although there are contributions from  various other musicians such as Elise Boeur (Fish & Bird), Ryan Boeur, Meg Iredale Gray and Bear Erickson. This lineup serves to explain the esteem in which Jenny is held in west coast Canadian roots music circles. The album was recorded and produced by Adrian Dolan at Fiddlehead Studios, Mayne Island, British Columbia and all songs were written by Jenny. There is a lot of originality in her songs with some very clever lyrics and a variety of sounds
and tempos, (although never above mid tempo) with every song having a strong, catchy melody.
The instrumentation is always clearly defined and has a lovely sense of space on every song, evoking the wide open spaces of Jenny’s Canadian homeland, but everthing is subservient to the power of her songs, the melodies and above all else those gorgeous vocals. The steel guitar weaves in and out of many of the songs creating a haunting atmosphere for Jenny’s clear precise vocals to do their work, as evidenced on album opener They Can’t Tell, a song that includes a powerfully propulsive drum sound on a tale that really evokes the haunting spaciness of the mountains. The gorgeous Five Nights is an incredibly descriptive story song with a somehow slightly unusual sound that lopes along nicely with a lovely warm country feel and a memorable melody. Things change a little on We Must Sing, with Jenny’s banjo taking the lead but still with the steel guitar creating a lovely atmosphere on a mid tempo song described beautifully by the title! Cold House Song has an appealingly repetitious melody that brings a different feel to proceedings and includes an excellent sing-a-long chorus on a song that evokes winter in rural Canada. No Misfortune is a lovely folksy country ballad with just acoustic guitar as company for her strong vocals, with a little variety thanks to the slightly unusual harmonies and song structure, followed by Weathervane,
which again has just Jenny and this time a tuneful electric guitar on a chirpy sounding song that is full of optimism! Finally, the banjo makes another welcome appearance on the slow moodiness of One Three One, accompanied at times by the mournful sound of a cello and some excellent harmonies.
This already crowded folksy country genre that Jenny fits comfortably into is not an easy one to stand out from but thanks to her tremendous songwriting, her ability to write beautiful catchy melodies and those gorgeous
vocals she is already head and shoulders above the pack. A tremendous album by a hugely talented lady!