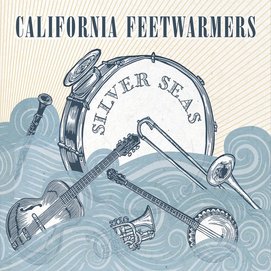 How do you define 'good time' music?  Listen to the California Feetwarmers! That would be the response from anyone who has ever heard them and in fact was what I wrote as the opening preamble when reviewing their tremendous debut album a couple of years ago. So what, if anything, has changed in that time? Fortunately nothing, unless perhaps they are even tighter than they were on their debut, although maybe not even that, after all they couldn't have been much tighter than on that first recording.
They are a seven piece band from, unsurprisingly, Los Angeles, California but i'm sure they would forgive any listener for thinking home was somewhere in the New Orleans area! They are Brandon Armstrong who plays sousaphone and bass, Charles De Castro, cornet, accordion and vocals, Josh Kaufman is on clarinet, accordion, piano and vocals, Carlos Reynoso, washboard, guitar and vocals, Dominique Rodriguez on snare drum and bass drum, Justin Rubenstein, trombone and vocals and finally Patrick Morrison plays banjo and guitar.
Of the thirteen tracks six were written by the Feetwarmers whilst the others are either traditional or were written by other people between 1903 and 1936 but as is usually the case I don't think many listeners will tell the difference between old and new. There is everything on this album from early Ragtime to jazz, blues and even an edgy western swing providing enough musical hues for any colour card, but always recognizable as the Feetwarmers, a band who have such a depth of feeling and passion for their music that peers are very few.
The album opener and title track, Silver Seas really sets the scene for what is to follow with its hugely entertaining and virtuosic playing and the almost comforting warmth this band bring to their instrumental interplay with sousaphone, trombone, clarinet and banjo on a real throwback to the early days of the 20th century. Tain't no use is the third track on this tremendous album and contains the first vocal, supported by sousaphone, trombone and banjo on a song that could be described as blues or jazz, perhaps both? There is a lovely cornet sound on the intro to Betty Brown and an excellent vocal on a new band original that has a bluesy, country feel, although the country edge is not helped by the brass! It is a really excellent song though that has an upbeat feel despite being downbeat lyrically! Pride blues is an instrumental that sounds ages old possibly due to the incessant sousaphone, despite being a band original. The brass all melds together beautifully with the chugging percussion providing a nice variety in the colouration as does the inclusion of the banjo. The breeze that brought me home is another tremendous Feetwarmers composition, this one led by a lovely steel guitar that gives a warm emphasis to an excellent western swing song. The vocal harmonies are perfect in this setting really creating the atmosphere of a 1930s band whilst the brass and mandolin merely add yet more colouration to the authentic feel.
I suspect there will not be a more entertaining album than 'Silver Seas' released this year. Such is this bands virtuosity that I don't think there is a limit to what they can achieve with their boundary stretching own original compositions alongside some classic oldies. That blend of old and new creates a unique stew that is not only full of fieriness but also contains that extreme comforting warmth to go with the fire. The fact that this is not purely a Jazz album in many ways ensures there is something here for all discerning roots music fans that are in love with the old stylings. I absolutely love it!