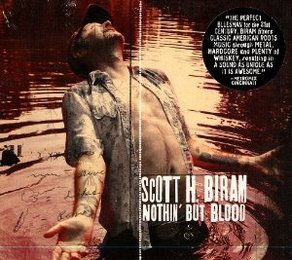 Scott H Biram – Nothin’ but blood
An absolutely tremendous album of an incredibly raw blend of blues and country by an artist who really should be a household name. Any description of this album is going to be too limiting but suffice to say everything is covered from raw ‘hillbilly’ music to an almost ‘heavy metal blues!’ He has been ploughing his own furrow for a number of years and in these days of sanitized music has an attitude that is so refreshing by writing songs and playing the music he has such a deep feeling for.
http://scottbiram.com/
Full review to follow


Gunther Brown – Good nights for daydreams
A really good album that, for want of a better description, blends country rock with alt. country. Warm expressive lead vocals, excellent songs and playing on an atmospheric debut that augurs well for the bands future. The melodies are all strong and the chiming guitars further build the atmosphere on songs that often tug at the heartstrings thanks to some very good lyrics and evocative vocals. Who is Gunther Brown? You may well ask, but he is not a band member!
http://www.guntherbrown.com/
Full review may follow!

Lindsay Lou and the Flatbellys – Here Between (e.p)
Just four songs but they bring a unique slant to the roots music genre, blending folk and  bluegrass with a jazzy feeling thanks to excellent playing and Lindsays beautiful expressive vocals leading the way. Three of their own classy compositions plus a beautiful version of May Erlewine’s The River Jordan.
http://www.lindsayloumusic.com/

Hatful of Rain – The Morning Key
An album of great beauty and diversity that never strays far from its country/bluegrass/old timey/ folk roots! It is ‘that difficult’ second album, but one that actually impoves on their excellent debut. The lead vocals, harmonies and playing are all excellent on thirteen tremendous band originals.
http://www.hatfulofrain.co.uk/
Will get the full review treatment soon.


The Hokum High Rollers – High water blues (2013)
Tremendous album of raw blues, hokum, hillbilly, ragtime, in fact just about everything from the early to mid 20th century ‘roots’ genre. The bonus is they do it with huge commitment, skill and with an authenticity that few can match.
http://www.reverbnation.com/thehokumhighrollers

Appalachian Karma – Transcendentalism (2012)
Appalachian Karma is actually French singer songwriter Pierre Souq, a man who has regularly over the last few years released albums that are hauntingly eerie and catch the spirit and atmosphere of the old time blues and hillbilly music. This is an album that is quite captivating and with repeated listening sessions reveals more depth. Amongst many others, 16 Horsepower were an influence.
http://appalachiankarma.wix.com/

Patrolled by Radar – Cool your jets
Roots, indi, alt. country, rock just about covers the scope of this excellent new album! Something about them always reminds me of British band Squeeze but really Patrolled by Radar have much more of a country feel. Conversely not all of the songs on this recording can be described as having country roots but that is part of the appeal of this talented band who seem to work their own varied sub genre!
http://patrolledbyradar.com/
May get the full review treatment

The Railsplitters
Really good album of mainly bluegrass but with a folksiness blended in. The virtuosic playing and vocals are just about as good as anyone has a right to be and the songs, whether their own excellent originals or covers of other writers work, blend beautifully as do the couple of unusual instrumental tracks. If you like your music smooth, uncluttered and of a high quality this is definitely an album for you.
http://www.therailsplitters.com/

Hannah Aldridge – Razor wire
Excellent album rooted in country but containing a bluesy soulful edge. Beautiful, character laden vocals on songs taken from life, warts and all. There is no holding back or sanitization of anything on this album including the tender ballads and although different Hannah has an edge and attitude reminiscent of Lucinda Williams. http://hannah-aldridge.com/

California Feetwarmers
How do you define ‘good time music?’ There is an easy answer to that question. Listen to the California Feetwarmers! This is a recording that covers trad jazz, blues, ragtime in thirteen tracks written between 1899 and 2013 and is just as authentic as the recordings made a hundred years ago. This is a terrific album that should be on prescription for those that need their spirits lifted!
http://californiafeetwarmers.com/

The Hillbenders – Can you hear me?
An album of virtuosic acoustic music by a talented quintet who are likely to be labeled ‘a bluegrass band’ but are much more than that. Certainly bluegrass is in the mix but so is indi rock, old timey and that indefinable edge that the ‘hillbillies’ of old possessed. It is that blend that lifts them above many of their peers. Four covers that fit in well with their own eight originals on an that is always fresh and uplifting.
http://www.hillbenders.com/

The Shivering Denizens – Sex, drugs and outlaw country
Tremendous album that probably fits best under the ‘Honky tonk’ banner although there are variations and they have a powerful devil may care edge to everything they perform, even the ballads. Easy to visualize anyone seeing them play in a honky tonk of old being able to remember the gig years later! Versatile and very good lead vocal and harmonies, with some tremendous playing added to some original ideas that extend the traditional format.
http://www.theshiveringdenizens.com/

The Far West – Any day now
A really good album of alt. country/country rock, with some terrific songs, tremendous lead vocals and excellent playing by this talented LA based quintet. Their quality really adds to the broad generic fields in which they play and it is that excellence that makes their songs atmospheric and believable.   http://www.thefarwestband.com/

The New Madrids – Through the heart of town
Terrific album of alt. country rock and soul! The essence of the two genres is maintained despite the diversity thanks to the excellence of the playing and vocals, added to the ten terrific original songs. http://thenewmadrids.com/
Full review to follow