DENNIS ELLSWORTH - ROMANTIC AS IT GETS
​ 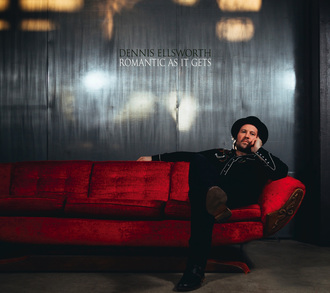 It's been a longtime since we last had a genuine 'romantic poet' to regale us with tales of love but it seems that with this, Dennis Ellsworth's fifth solo album, finally there is someone whose romantic power is even enough to have some appeal for old cynics! There is little on this excellent album that reaches above a sedate mid tempo, something I initially found difficult on his previous but one recording, 2013's 'Dusk Dreams.' On the advice of a couple of friends, who both have 'good ears' I caught his performance at that years Maverick festival and was hugely impressed by his ability to hold an audience in thrall with his poetic love songs. Prior to his solo recordings he was lead singer and songwriter with the successful 'country' band 'Haunted Hearts.'
The theme of this album is open hearted philosophical ruminations on love lost, love found and love sought with the tempos ranging from slow and mournful to the already mentioned sedate mid tempo, albeit one that is often incredibly upbeat, with many of the songs having a lovely reflective atmosphere. In so many ways he could have been born to make this music, with a natural break in his voice that enhances the feeling in his songs, something that sets him apart from most other singer songwriters. Talking of other songwriters there is even a name check for the late great Jason Molina; he is that sort of open hearted singer songwriter!
His band is both excellent and sympathetic to the requirements of each song, an ability that must be difficult to acquire when a recording is as lyrically and vocally orientated as this. It would be so easy for an album such as this, with its mellow ruminations, to pass you by but such is the manipulative emotional ability of Ellsworth's vocals and lyrics that it is always highly listenable and certainly not harmed by the fact that every song has a memorable and attractive melody.
The albums opening song, Shakin' On The Plank, breaks the listener in with its chiming electric guitar on an easy going intro accompanied by steel guitar, drums and bass before a warm expressive lead vocal comes in on a tremendous mid tempo love song that has just about everything of quality needed on a country ballad. Full Moon Blues has a different, slightly darker guitar sound with a powerful drum and bass sound on a slow ballad that reflects on the past and includes some appealing harmonies on a composition that has an ethereal quality. That ethereal quality is continued on the beautifully reflective Ghosts Of Love with its slow moody atmosphere, weeping steel guitar and gorgeous feminine harmonies. Skyline River Valley Dream has a beautiful steel guitar sound with bass and drums on another gorgeous tale of lost love that actually mentions Jason Molina, whilst Mercy Doll is another hugely attractive song with some powerfully melodic twangy guitar sounds, interspersed with occasional uplifting harmonies and a melodic guitar solo on a song that has an upbeat feel despite its advisory tone.
As with the above mentioned album, 'Dusk Dreams,' this recording is generically unspecific but with some excellent twangy guitars and the use of steel guitar it will slot nicely into any stores country racks; In fact I can well imagine many 'country stars' snapping up these songs if they are given the exposure, such is the quality of each and every composition. If you only buy one album this year, or next, that can be considered to have a 'mellow sound' look no further than this one. I doubt that you will find better.