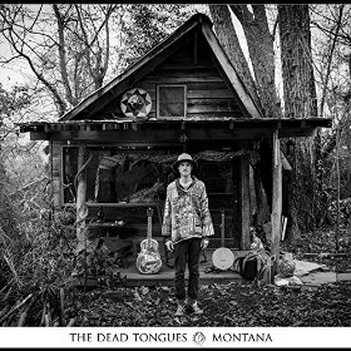 This is Ryan Gustafsons third album and his second with his 'Dead Tongues' persona and with just a few exceptions is as different from his start in the music business as it could possibly be. He was a member of the rootsy 'Boxbomb' an often melodic, sometimes grungy, pop rock band, from their start in 2003 to their dissolution six years later, as well as making contributions to several other bands prior to working solo. The first solo album, 'Donkey,' was released in 2009 under his own name with its follow up and first Dead Tongues recording 'Desert' appearing in 2013. Donkey on occasions showed traces of what can be found on this excaptional recording but probably had a little more in common with his previous music, whereas Desert showed signs of moving in a more countrified rootsy direction but not enough to prepare the listener for this extraordinary recording.
There is no one really that The Dead Tongues can be compared to, although on several songs I was reminded of Joseph Huber, but other than that nothing really to tie him in to. The same can be applied to generic labels. There is certainly an old timeyness in the deep roots of the album but there are also some blues elements, even a little folksy psychedelia, all underpinned by a powerful and yet mellifluous high lonesome, sometimes otherworldly feel that plants The Dead Tongues firmly in a genre of one! On playing the album to several friends a couple of suggestions were 'gothic americana' and 'modern day hillbilly,'and in many respects both have some relevance but still sell this tremendous album, that virtually defies labelling, short. There is no doubt that the songs are all well defined and strong but always with the feeling that he is experimenting with the sound, not an overtly 'experimental' recording, but just enough to let the listener know that whilst some of the song styles are at least vaguely recogisable, Ryan has his own ideas on how to update traditional styles without losing any of the powerful haunting elements that made them so powerful and affecting in the first place.
The album opener Graveyard Fields kicks off with a chiming guitar and an easy going tempo before Ryans warm likable vocal comes in on a song that can probably be slotted into a folksy country category but really is generically ambivalent. The nice solid percussion and undestated keyboards keep things rolling along with an ocasional edge towards a harder sound on a song that in many ways evokes the 'Tulsa sound.' There is a warm treated electric guitar with harmonica support that gets Black Flower Blooming, another haunting tale, underway leading in to Ryans excellent vocals, with deep bass, percussion and a blend of sounds that give the song a sometimes light psychedelic feel. Banjo and fiddle give My Companion a strong old time 'hillbilly' feel that is soon joined by Ryans vocal on a tremendous song that virtually defines the 'high lonesome' sound. In many ways it reminds me of the music of Joseph Huber and if the reader is wondering, that is a huge compliment! The excellent banjo drives Wildflower Perfume another hugely evocative and haunting tale with Ryans high lonesome vocal at its best, with occasional interventions from the equally haunting  and atmospheric fiddle. Stained Glass Eyes is another incredibly haunting, tale with an atmospheric instrumentation that includes banjo and acoustic guitar with an occasional straining harmonica providing an attacking diversity on an otherwise mellow song, despite a slightly off kilter otherworldly atmosphere.
I for one hope that Ryan Gustafson never goes back to the rock band format and stays with his 'Dead Tongues' persona, feeling that he has found a style that whilst rooted in traditional music also includes some powerful experimantation that genuinely updates the old roots music styles that. Perhaps more importantly, is the fact that he has a natural feel for this genuinely original old time music that gives him a uniqueness that many would kill to possess! This is a tremendous album that repays, over and over again, repeated listening sessions!