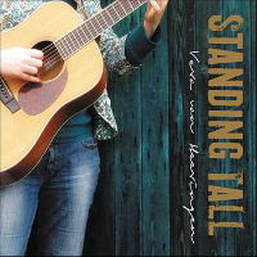 
This excellent debut album by Vera Van Heeringen is proof, if it is still needed, that many Europeans are just  as capable of playing heartfelt American music as the Americans themselves are. This shouldn’t really be a surprise when you think about it, with a large part of the U.S population having roots that are firmly embedded in Europe even if they are divided by any number of generations. Vera hails from
Holland but has spent some considerable time in America adding to her influences and is highly rated by many local artists of high quality such as Tim O’ Brien who helped out on the album as well as writing the sleeve notes.
There is a really nice sparse sound to the recording as well as Vera’s lovely warm vocals that are reminiscent of several other folksy country singers, but for all that she has her own style, often including a little mournful
sadness in her voice, allied to the strong character that enables her to create whatever atmosphere the song demands. All that she sings has an air of  reflective melancholia that is quite natural in her vocals, ensuring her
individuality and slightly left of centre position in country/ folk music, in many ways sitting between bluegrass and old timey and creating a bice blend. Whilst her music doesn’t yet have quite the power of artists such as Gillian
Welch or Iris Dement she can be filed alongside  them, but somehow creates a less introverted atmosphere, even at times having a similar laconic air in her vocals to Eilen Jewell. Add all this to the fact that if she couldn’t sing, she could make a living as an incredibly talented guitarist and can apparently, according to none other than Tim O’ Brien, ‘play anything with strings!’
She inhabits a folksy country area that is reminiscent of but not actually part of the bluegrass mainstream even at times having a little of the ‘old timey’ feel. On this high quality recording there are eight vocal tracks and four instrumentals, all of which were written by Vera with the exception of a beautiful version of A.P. Carter’s Lulu  Walls. Most of her songs have a mellow feel with a nice light touch but often a dark atmosphere, despite which everything on the album can have that dreaded word, ‘pleasant’ attributed to it but is saved from blandness by the  quality of the playing and Vera’s vocals that have a slight edginess, (or character) plus her very good songwriting.
The lineup on this recording is Vera on lead vocals, acoustic guitar and occasional mandolin, Andy Seward, double bass, Dave Proctor, mandolin and acoustic guitar, Dave Luke, electric guitar, mandolin and backing vocals, Jock Tyldesley, banjo and fiddle and Andy Watson on drums, with both Louisa Jones and Tim O’ Brien on backing vocals and the album is produced by Vera with Andy Bell.
The album kicks off with Old Man, a beautifully played and sung folksy story song in a style that sits
somewhere between old timey and modern day folk on a heart rending tale about the sad loneliness that some suffer in old age. The acoustic instrumentation is excellent with her guitar accompanied by banjo, mandolin and brushed snare. You’re All is a lovely tender love ballad that verges on electrified folk, (guitar) with Vera’s lovely vocals almost having an almost melancholic quality to them. There is that lovely version of the Carter classic, Lulu Walls, with some tremendous fiddle and mandolin playing and a nice acoustic guitar sound, as well as the  beautiful
harmonies that creates an old timey atmosphere. The Owl Returns is an unusual folksy song with electric slide guitar, mandolin and fiddle giving it a completely different atmosphere to most of what precedes and follows, whilst Pass Me The Whiskeyis a nice shuffling country tale with some excellent instrumentation on a song that is a little reminiscent of Eilen Jewell. Finally the four acoustic instrumentals are all played with consummate skill and provide a nice break between the well written songs.
Overall this is a high quality debut album by an artist who, thanks to her all round talents, promises much for the future.