WRINKLE NECK MULES
'I NEVER THOUGHT IT WOULD GO THIS FAR' 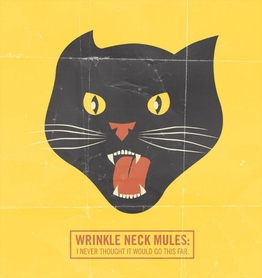 On reflection it seems that much of what is not termed ‘country pop’ is put under the alt. country umbrella. Sooner or later we will have to stop using it as a catch all term for country music that doesn't fit into the 'mainstream.' The poppier, big selling 'country music' is actually much less country than that sadelled with the alt. label!  We really should be  referring to the music played by bands such as the Wrinkle Neck Mules as the real ‘country music,’ with all the edginess they produce and the boundaries they stretch echoing the feeling and in some ways, the lack of guile that stretches down from the musicians of many decades ago. Listen to the old timers from the 1920s and there is very little polish and a huge amount of edginess, as befits a music strain that came from myriad influences and was produced by ‘real’ people who whilst wanting an easier life as professional musicians, in the main actually sprung from a poverty stricken background and in most cases the meagreness of their lives continued unabated. The Wrinkle Neck Mules, whether intentional or not, echo that raw, often heartfelt music of nearly a century ago, not so much stylistically but certainly with the edginess that all real country music should have in a natural abundance.

That takes care of the rant, now let's get down to the music! This is the Wrinkle Neck Mules sixth studio album in a recording career that started in 2004 with ‘Minor Enough.’ As soon as I heard that tremendous debut I was hooked and it will come as no surprise to their many fans that with each album released the quality has been upped, despite the excellence of that first recording. We often talk about great alt. country bands but the Wrinkle Neck Mules are up there with Son Volt, June Star and the long gone and sorely missed Star City. So how good is this new album? Hand on heart, i’m forced to say it doesn’t really get any better than this brilliant recording. From the raw and gravelly, but hugely evocative sound of both lead vocalists, the excellent harmonies and song writing, memorable melodies it’s not putting it too strongly to say this album virtually defines alt. country!

Whilst this recording is a long long way from ‘easy listening’ i’m finding it one of the most rewarding albums i’ve listened to for some considerable time with its incredibly literate stories, some of which are circuitous and take time to unravel, only adding to the pleasure of the listening experience, making it even stronger for that. There is a dark rustic grittiness to much of the album, never in a depressing sense, more of a rooting in the real world than any idealistic fantasy, which when added to the melodic, beautifully written, played and sung elements there is not much else you could wish


The band is made up of Andy Stepanian on guitar who also shares songwriting and lead vocals with Chase Heard who in turn plays banjo and guitar. Brian Gregory is on bass guitar, Stuart Gunter, drums and percussion and multi instrumentalist Mason Brent plays mandolin, banjo, pedal steel and  guitar.

Most of the songs tell dark stories of life on the ‘wrong side of the tracks,’ from drinking too much, pushing moonshine, travelling, prison life, poverty, death, lost love, often rooted in life many decades ago and all told with a convincing lack of artifice. Rather than being simple tales they have a realism that shows the subject of many of the songs to be suffering from confusion over their situation with a number of broken, disparate thoughts and observations and a lot of raw attitude!

It's impossible to pick highlights from an album this good but I will just mention a few. Bury my gold includes a gorgeous accordion and banjo on a mellow of sound, melodic ballad with excellent lead vocal and terrific harmonies. It genuinely is a great song that really couldn’t be improved upon and although there are differences it reminds me of John Prine’s Paradise. It is that good! Mustang Island has an excllent propulsive chiming sound that reminds me in some ways of ‘The Gourds.’ There are excellent vocals and harmonies and even a little of the front porch feel on a tale of the clashing feelings relating to the popular holiday island. On Release the reins there is a lovely steel guitar and chiming electric guitar on a slow moody downbeat ballad that again is rooted in a sad questioning confusion of thoughts, this time relating to the subjects situation. A nice acoustic guitar and keyboards sound starts Never was the bird, an excellent tale, again with lovely steel guitar and a powerful atmosphere on this tale on which the listener can almost feel they are journeying with the subject and a melody that rises and falls in an uplifting way. Undertaker's song is an easy going mid tempo tale with excellent banjo propelling an explicit story of the thoughts of our subject at the moment of death! The haunting steel guitar deepens the atmosphere that is musically upbeat and thematically downbeat.

This album shows the Mules mastery of everything in 'country music' from slow moody ballads to speedy, powerful rockers, all performed in their own inimitable style. To me anyway, this is a truly great album and if those that claim to be country music fans would only give the Mules and other similar bands a chance a whole new musical world would open up in front of them as it did for me long ago!