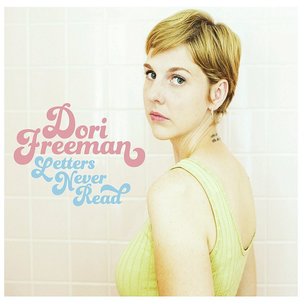 Hailing from Galax, Virginia this is Dori Freeman's 'difficult second album' and follows on from 2016's excellent self titled debut. So, does 'Letters never read' suffer from that second album syndrome? In a word, No! In another word, o.k several other words, this is even better than that tremendous debut! The songs are more expansive and cover a greater variety of styles although pleasingly Dori never loses that edgy, rural Appalachian leaning. When I say style I don't mean she moves from country to rock to heavy metal etc. It is more a question of moving from 'hard country, to old timey, perhaps segueing into a little folksiness, even completely unadorned a cappella, but always having a little of that high lonesome grittiness that keeps every syllable of every song real.
There is a huge depth of feeling for traditional music in Dori's writing and performance and yet a strong slice of modernity blends perfectly giving listeners the best of both worlds. On the one hand those of us whose tastes lean more towards the 'old timey traditionalists' can get a sense of that in her songs, whilst on the other hand, for those whose tastes are rooted in the 21st century that strong modernity should allow her music to have huge appeal. Her vocal style is very open and expressive and seems to somehow summon up that 'high lonesome' rural sound so prevalent many decades ago on this modern, beautifully conceived and arranged album.
This recording, perhaps even more than her debut, never allows the listener to be lulled by any saminess, always changing perspective, tone and colour from song to song with some of her own compositions, several excellent covers, a stripped down a capella song, what can almost be termed classic country, an Appalachian folksiness that almost has a 'hillbilly' feel, all bound together by Dori's beautiful vocals and some tremendous arrangements.
On If I could make you my own the chiming mandolin, guitar and percussion back up Dori's lovely heartfelt love song made the more memorable because of its easy on the ear melody and the excellence of the backup vocals. Dori's gorgeous unadorned vocal works beautifully on Ern & Zorry's sneakin' bitin' dog an excellent a cappela Appalacahian childhood story song. It has the feel of a traditional 'hillbilly' song but in actual fact is an excellent composition that is credited to Dori and Appalachian folk artist and musician Willard Gayheart. Over there is a real Appalachian folk song with just banjo accompanying Dori's vocal on this traditional song that Dori adapted and virtually made her own. That is immediately followed by a chunky chugging guitar sound as befits a Richard Thompson song on I want to see the bright lights tonight a beautiful version of the great bard's classic. Here it has a folksy country feel with keening fiddle competing with the guitar, and generally losing out, but keeping enough of a foot in the door to change the perspective from the original. Finally, we're treated to another beautiful vocal from Dori on the late Don Williams composition, Yonder comes a sucker, with the only accompaniment being the military like percussion that seems to take the song back into the 19th century, at least atmospherically, despite the modernity of her lovely feminine vocal.
'Letters never read' is a quite stunning album of ten songs and although it clocks in at less than half an hour most will wear out the 'repeat' button thanks to the unpredictability and diversity of styles. In actual fact there can be few if any 'country' albums that contain such variety, although those stylistic variations overlap, flow and blend beautifully thanks to Dori's Appalachian roots and, of course, her huge talent! I know that the Nashville music machine and indeed the charts like things to be kept under control and often predictable but Dori Freeman is a country singer songwriter who could quite easily cross over and appeal to lovers of 'commercial country music' given the chance and is one of the very few artists who wouldn't need to 'sell out' her own unique style to get the success her talent so richly deserves. In a nutshell, 'Letters never read' is an album that has something for everyone so wouldn't it be nice if 'everyone' purchased a copy!