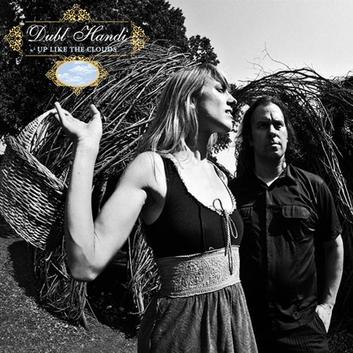 
It’s strange how since the late 20th century ‘hillbilly,’ or ‘old timey’ Appalachian rooted music has started to become more popular again. It just shows
that if the quality is there the music never dies, particularly if the modern musicians who put their own stamp on the old songs are anywhere near the quality
of this superb duo. The number of new c.ds that have dropped through my letter box, or via download links on the www, that contain ‘this weird old American’
music has sky rocketed in that time and it’s pleasurable to say that in the main they have ranged from very good to quite exceptional. This tremendous album is
most definitely one of the latter. Their band name is apparently taken from a nineteenth century washboard company, giving some indication of where their roots lie, and is pronounced ‘Double Handy.’
The hugely talented duo consists of producer Brian Geltner who also plays drums and handles all percussion as well as mellotron, marxophone, washboard, electric guitar and harmony vocals whilst Hilary Hawke plays banjo and all lead vocals. She has a beautiful expressive voice that is able to wrap itself around the old songs and virtually make them her own. There doesn’t seem to be anything contrived in the performances on the album, simply two people playing the music they love and have a powerful feel for and were it not for a little update in some of the instrumentation could easily be an eighty or ninety year old recording that has been the subject of some perfect cleaning up!
Everything about this album evokes old timey music with ten of the songs being traditional, one by Uncle
Dave Macon, one by Olla Belle Reed and three Hilary Hawke originals that are impossible to distinguish from the old songs. The banjo is the signature sound but is more than just supplemented by not only the drums but also the varied percussion, with the occasional use of the mellotron, marxophone, trombone and jews harp. None of these instruments are over used but do bring a small but perfectly formed diversity to the sound, even imbuing the music with not only a strong individuality, but even, surprisingly, a strong feeling of originality, not something you would usually expect from the reworking of old songs. It is impossible to get away from the feeling that these songs are nearly all being played on a front porch in the Appalachians many decades ago by people born into the lifestyle and consequently with the music soaked into every pore. There is nothing tutored about the music, just a cart load of natural ability and feeling that has to be felt and simply cannot be taught.
The album opens with the traditional Shout Little Lula with it’s lovely chiming banjo joined by drums and percussion with the eerie sound of a marxophone in the background all lending tremndously atmospheric support to Hilary’s evocative vocal on an old timey hoedown number. This is followed by Uncle Dave Macon’s C’mon Buddy with Hilary’s lovely feminine vocals having a strong rural old timey quality, with the mellotron flute adding an otherworldly feature that gives an unusual but essential contrast to the banjo and percussion. A brilliant version of the song and beautifully inventive. The traditional New River Train, is next up, and again includes a quite original treatment with the usual excellent percussion and banjo but with mellotron cello, and an Iphone indian drone app added, on a slow moody song that again has a strange otherworldly atmosphere. To come up with ideas that add to this old as the hills music, artists really do need to feel the music and this pair certainly do that, and yet despite those additions the sense of tradition is never lost and neither is the generally sparse feel. Cluck Old Hen is hugely evocative of old timey music with it’s treated vocals and is almost impossible to imagine being played anywhere other than a front porch of a lost ‘holler’ of a hundred years ago. It is so eerie you really wouldn’t want to physically be anywhere near that front porch and if you were would certainly want to be hidden from view, but within hearing distance! Lonely Ghost is another‘front porch hoedown,’ this one a Hilary Hawke original that blends seamlessly with all around it with it’s excellent driving snare, banjo and dobro and a few interesting percussive additions. Katie
Cruel has an unusual treatment of instrumentation and vocals that gives the song an incredibly dark atmosphere, with the hammer dulcimer and banjo blending to create an almost sinister unearthly ambience. Finally, Poor
Ellen Smith is a beautiful sad traditional murder ballad that has an incredibly authentic feel and has never sounded more heartrending. For good measure this generous fifteen track album also includes two very good instrumentals, one of which was written by Hilary.
In many ways it would be so easy to describe every track on this tremendous album, such is the uniformly high quality of each, with the original little nuances lifting virtually every song, but I don’t want to say more and
spoil your discovery of some great songs by a talented duo who really have given some old tales an update whilst staying faithfull to traditional music.