ZEPHANIAH OHORA & the 18 WHEELERS -
THIS HIGHWAY 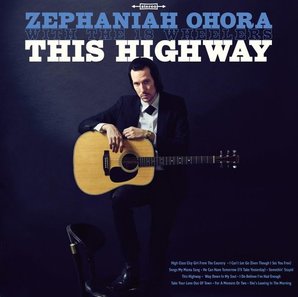 Zephaniah Ohora actually hails from Brooklyn, New York, not necessarily a location from which you might expect a hugely talented singer and songwriter of country music to emerge. Whilst his voice has what might be described as a 'contemporary (or even 'classic') country' feel there is something in both vocals and music that edges it away from the mainstream, as a consequence of which the recording takes on extra power. The effect is similar to that of Cale Tyson and several of the other 'must be heard' young country singer songwriters, a collective we should most definitely add Zephaniah Ohora to.
Whilst i've said that the sound verges on a contemporary feel what sets it apart is that there is a little of the 'strangeness' that could be found in early country music, although in this case it also has touches of that almost, but not quite, indefinable psychedelia of early Flying Burrito Brothers and Gram Parsons. Not specifically psychedelic, just a vagueness of elements, but most definitely country; as I said, there is a strangeness, but a hugely appealing one.
His band are pretty exceptional too, consisting of Zephaniah on lead vocals, co-producer (along with Luca Benedetti) Jim Campilongo plays electric guitar, Roy Williams, piano, Jon Graboff on pedal steel guitar, Scott Colberg, bass and Nick "Crime" Anderson plays drums and the album was recorded at the Bunker studios in Brooklyn. As many will know Jim Campilongo is himself a hugely talented master of the telecaster, songwriter and occasional singer whose playing has graced dozens of recordings. He knows Zephaniah well from their time in the band 'Honeyfingers' with whom they played the classic 'country and western' made famous by artists such as Ernest Tubb and Marty Robbins amongst many others. The two, shared a mutual love of 'truck driving country' and before very long the 18 Wheelers came into being and started performing Zephaniah's original songs.
Of the eleven songs on this album ten were written by Zephaniah, the odd one out being an incredible duet version of Somethin' Stupid (Yes, that one!) with the wonderful Dori Freeman, a song I wouldn't have thought would work (or probably wanted it to!) but this pairing gives it an edge and virtually makes the song their own special ballad. Their tongues may have been firmly in cheeks but nothing can take away the superb job they made of the song. (Just so long as they don't try that Achy Breaky heart aberration!)
Stylistically this album has strong echoes of past 'country singers' but is no mere copy of them or the style. It wouldn't be possible to make an album this good on which everything has such a strong and natural flow, especially with the already mentioned 'edginess,' unless the artists had an incredibly strong feel for this generic strand, literally and easily convincing the listener, certainly this one, they had no option but to follow this style as if driven by their immersion in it, which maybe they were.
Chiming, jangling guitars get the album rolling on Way down in my soul with solid percussion driving things along and a classic haunting lead vocal that has a strong 1950s and 60s texture.  They are eventually joined by the steel guitar and occasional fiddle on a song that has a 'classic country' feel albeit with a barely discernible edginess, but none the less one that is there. There is a beautiful steel guitar and percussion intro on I do believe i've had enough with piano joining in and another tremendous, 'classic country' vocal that may be rooted in the 1950s but is also very much of the 21st century. A really nice twangy guitar adds further depth to an excellent song, with the instrumentation giving an air of modernity to the song. High class girl from the country is very reminiscent of classic Glen Campbell on an easy rolling song but one that has a strong, haunting atmosphere. The chiming melodic guitar helps to ground the song along with the ubiquitous bass and percussion, with Zephaniah's lead vocal having a slight echo that gives the song a timeless, in some ways otherworldly, feel. For a moment or two is a gentle country ballad that signs off a tremendous album that puts in the shade just about every mainstream album I've heard so far this century.
However, whether the mainstream picks up on an album of this quality without the use of a big promotional budget remains to be seen. In fact it will be interesting to see what fans who lean towards the alt. field make of an album that on the face of it contains much in common with the 'mainstream' but actually has so much more individuality than that word depicts. 'This Highway' is a truly excellent country album that recaptures the best qualities of 'country & western' without any of the cloying blandness and over production that so many albums have suffered and continue to suffer from.