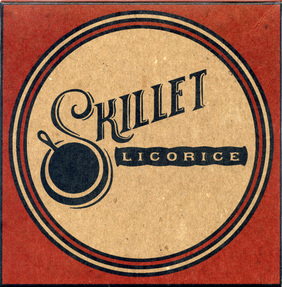 This debut album by the hugely talented duo of Skillet Licorice is by no means the pairs debut recording with their San Fransiscan background in several other string bands. Elise Engelberg is a Kentucky native who started out by learning classical violin and then moved to California and began to play fiddle in numerous string bands including The Crooked Jades, The Mercury Dimes and on tour with The Stairwell Sisters. She plays all fiddles and banjo on this album whilst Matt Knoth who grew up in San Jose, California playing bluegrass plays all guitars, banjo and vocals, although on this recording there is only one vocal track. The duo also perform and record with the talented five piece old time string band, the Mercury Dimes as well as 'old timey'/bluegrass 'super group,' The Black Crown String Band, which also boasts members of the Earl Brothers and Windy Hill.
They play a variety of old tunes and songs ranging from 'hillbilly' hoedowns, rags, blues and folk. Whilst some of what they play will be recognizable to the casual listener they also include a few obscurities that all contribute to keeping the 'old music' alive. Of course it helps if the performers are virtuosos and this pair certainly are, added to which they have a natural feel for the music that ensures they are not merely copyists but are actually bringing their own individuality, giving it a modern boost without losing any of the original atmosphere. Whilst the sound is sparse it is varied with the use on occasions of piano, bass, mando and cello, never overdone, but enough to bring a little diversity to the recording.
That diversity is necessary on an album that contains a dozen old tunes, enabling the listener to keep guessing at what will come next. Too many similar albums can't retain the listeners' concentration for long as they descend into an often soporific saminess, something that certainly can't be applied to this entertaining recording. Texas Gals is a speedy 'hoedown' instrumental with banjo and fiddle going at a furious pace and conjuring up what is probably an accurate picture of an old time hoedown, whereas on Pretty Little Dog there is a haunting quite eerie banjo lead on another excellent instrumental. The only real vocal on the album is Sally Ann a classic tale that really catches the atmosphere and feel of an old timey recording on a song that again can again be imagined in a hoedown setting. Honeymoon Waltz is a fiddle led tune with support from guitar on a slow and dreamy rendition of another old tune, with final mention going to Peacock Rag, an up tempo and upbeat piece of 'vaudeville' with piano and fiddle.
Ultimately this excellent recording not only shows off the duo's command of their instruments and the genre but gives an indication that in this twenty first century the old music is being kept alive and is thriving, albeit with a modern touch, something that is so important now that the originators are long gone. It is musicians such as these that have the skill to not only play in the tradition but to bring their own individuality to the genre which surely is what 'folk' music is all about. Long may they and a growing number of like minded people continue to do so.