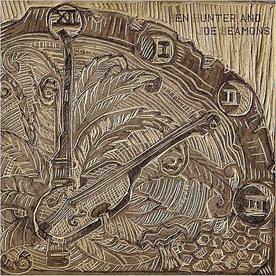 There is not much in the way of old time roots music styles that these two hugely talented men won’t attempt and it’s incredibly satisfying to report that they succeed totally! On this both excellent and authentic ‘rural’ roots music album they completely nail blues, folk, old timey, early jazz and no doubt other obscure musical forms that I can’t name at present. The recording is an exercise in authenticity from two men who are so steeped in their readings of old songs that it is as if they have been transported from a time before any recordings were made. Certainly the quality of their music can be compared to that of those early recording industry days way back in the 1920s but there is so much subtlety and a feeling of newness to the songs that it would be easy to imagine the old timers picking up the songs from these two.

With vocals, banjo and fiddle being just about the only instruments on this album it would be very easy for the recording to become boring but nothing could be further from the truth. The dexterity they exhibit on their instruments and feel for the music is such that there is always a genuine feeling of wondering what is coming next, even when you have played the album as much as I have. There is occasional guitar and even kazoo but not much else. Both are very good vocalists, again, helping to add diversity to the album and their harmonies work really well, but there is no real dominant feature to this album of exceptional quality unless you include their attack and total commitment. Instead of trying to add density to the recording they leave plenty of space, ensuring the music is able to show off it’s, often raw, power.

The album opens with Jazz Fiddler, a ‘good time’ bluesy jazz song with the lead vocal and harmonies driven by fiddle and banjo on an evocative tale that, no doubt justifiably, sounds as if they are having a great time! That is followed by Mississippi Heavy Water Blues, a different vocalist but the same instrumentation on this powerfully authentic sounding rural blues. The percussive clicking and the melodic banjo give the song a powerful home made feel as if recorded on the front porch of a Mississippi cabin. The House Carpenter must be one of the most recorded old timey songs around, with most of the better versions including a dark all pervading spooky gloominess. In many ways it is that ability to engender a spookiness that, at least to me, dictates the quality of a particular version. This duo’s interpretation is better than most of the modern day versions, at times seeming to have the atmosphere of the 1920s originals, a state that all aim for but very few achieve. It starts with an incredibly mournful fiddle, soon joined by the banjo and the haunted keening vocal that enhances the awful desperation of the songs characters. Long Tall Mama includes a nice blend of guitar and fiddle with an excellent vocal on this old Bill Broonzy blues song. Such is the quality and depth of feeling in this and the other songs on the album that the writers would certainly approve of what this pairing is trying to achieve, imbuing old songs with a natural authenticity but at the same time bringing a newness to them. They are not aping the original versions at all, but they are faithfull to the old time genre, a contradictory statement I know, but it is probably the freshness and vitality of the songs that creates those discordant impressions. Final mention from this recording of fourteen classic songs and instrumentals goes to their tremendous version of Willie McTells classic blues song Broke Down Engine Blues, with a strong vocal performance from both men and the fiddle and banjo matching each other in dominance.
​
It is so easy to label an album such as this as a covers album but it preferable to label it as carrying out maintenance on the old traditional songs, keeping them alive and fresh. Very few are able to maintain that freshness whilst imbuing the song with a similar atmosphere to that achieved at the dawn of recorded music. This duo recognize, by treating blues (or ‘race music’ as it was then) and hillbilly (now ‘country music’) as equals that they basically came from two different races of people, albeit with very few distinctions thanks to the common poverty which beset them all, totally ignoring the commercialism and racism that would soon lead to their separation. This is not only a tremendous album but also a refreshing précis of music that would be lost were it not for the intervention of musicians who have a genuine feel and love for the music. This duo are as good as it gets!