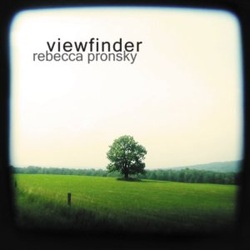 Prior to this album I was totally unaware of Rebecca Pronsky. It was only when I discovered that she is soon to play a gig locally that I decided to give the album, which was buried beneath yet another pile of albums meant for review, a listen and I’m really thankful I did. The songs are all written by Rebecca and lean strongly towards ‘country’ but with a little folksiness. Her writing style is incredibly literate and with the beauty and relative sparseness of the instrumentation, added to her at times slightly reminiscent of Natalie Merchant, vocals, she is a highly original performer within, what is probably easiest described as the alt. country sub genre.
There is some excellent support on this album from producer Rich Bennett who also plays mandolin, guitar, organ and piano. Further colour is added by Rich Hinman’s pedal steel and Dan Shuman on bass with Russ Meissner on drums. All play with great expertise and the songs always have a sparse well chosen instrumentation that allows the tremendous songs and Rebecca’s lovely vocals plenty of breathing space. Bennett’s guitar playing is one of the highlights on this album of highlights, thanks in the main to his highly tuneful guitar sound that binds the diverse subject matter and in many ways gives the album a kind of twangy musical signature.
Her clear strong expressive vocals also have an appealing languorous feel that only seems to enhance the strength of these beautifully written songs. If not totally dark many of the songs are at least marked down with an air of gloom, although a beautiful gloom, fighting back against lifes kicks but with a realisation that all this is doing is just stemming the tide. Overall they almost give a nicely balanced down to earth view of life that seems quite realistic but without any great optimism, more in hope than anything else. Despite hailing from Brooklyn she seems to have come naturally to her rural earthy feeling music with it’s emotional flow and fluidity that seems, just as you think a little optimism might be about to be revealed, to hold back! People often describe particular artists music as being ‘real’ and this certainly is. In a strange way that slightly dark haunting feel of the album is made more so by it’s beautiful sounds of Rebecca’s exquisite vocals and the gorgeously tuneful lead guitar rather than it’s strong themes.
The music rarely gets as high as mid tempo but rather than handicapping the album as a whole, actually gives it an almost conceptual continuity, which I suppose in many ways any album that tells stories of life actually is. Rich Bennett’s twangy guitar and Hinman’s pedal steel gives the album a good start on Hard Times a song that advises pulling yourself together and fighting back when times are hard. This is followed by more twangy guitar on Day Of TheDead, a quite harrowing tale on which the lyrics and vocals evoke a tale of almost numbing hopelessness. Mercury News is an excellent country song with plenty of twang and played at a nice loping mid tempo and is followed by The Wheel, aslow languidly dreamy song with nice chiming guitar and piano. Fragile World has a light jazzy feel with a nice accordion on a tale of coping with lifes disapointments but without any real optimism. And so the album continues with one excellent song followed by another, with probably the most unusual of the lot being album closer Good Life. This, with it’s heavy languid guitar, is a near instrumental on which Rebecca’s vocals almost show surprise at having such a good life, consequently perhaps not expecting the good things to last. Despite being almost celebratory there seems to be an illusory irony in the few lyrics and vocals, with the song, and indeed the whole album at times having an almost ambient texture.
An album of rare beauty that demands repeated listening sessions!

A taster will be supplied by our friends at the Union Music Store, Lewes at 3-00 p.m on the 24th when Rebecca will be playing a short  in-store set.