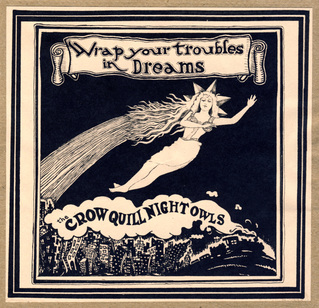 
This tremendously authentic core trio are supplemented by various other musicians on an album that is rooted in not only raw old time string band music but also what at that time was referred to as ‘race music’ and even a little jazz. Whilst they are no respecters of generic boundaries there is obviously a huge amount of respect for the music of the best part of a century ago. They have the feel of a jug band wrapped up in a little vaudeville and a large dose of hillbilly that ensures they are blended into a pretty much unique and highly skilled band. You can’t really take such diverse musical styles and make them fit your aims unless you have a love and a natural feel for those old styles.
This is the third album by the band and whilst it’s always nice to report a musical progression in any artists subsequent releases this one is not a huge improvement, simply because the first two, which I only aquired recently, were so impressive that I couldn’t see how they could be improved upon. This new recording does up the quality by a small notch and whilst I will probably play it on and off till doomsday the same applies to those previous two, with all three being so good that if you enjoy one you really need to get the other two as well!
The song writing credits range from traditional to the Memphis Jug Band, also including Georgia Tom/Tampa Red, Jelly Roll Morton, Hammie Nixon and plenty of old string band input from the likes of the Dallas String Band.  As I said earlier, plenty of diversity!
The core band consists of Kit "Stymee" Stovepipe on lead vocals, national resophonic guitar, harmonica, washboard, kazoo, wash tub bass, tenor banjo and jug! He is more than ably assisted by Windy City Alex who plays tenor banjo, banjo-lele and kazoo as well as vocals and Baylin Adaheer is on wash tub bass, vocal, kazoo and banjo-lele. Quite a mix of instruments but one that is played with huge skill and feeling, something that can be applied to everything on their albums, almost as if they have never heard any other music. Added to these three are Too Tight Devin Champlin on mandolinetto, fiddle and backing vocals, Lucas Hicks, suitcase percussion, washboard, spoons and bones, Itchy Ribs Robinson, Washboard Syncopations and Jerron Paxton plays piano and pants! As you can see from that little lot, a mix of instruments that we are quite unfamiliar with in this 21st century but played and arranged with a mastery that enables them to perform convincingly within any of the old generic styles they choose. There is no holding back on this album, everything is played with total commitment and the often casual  atmosphere they generate just adds to the authority and no small amount of originality that they bring to these old
songs.
There are twenty four tracks on this album that I seem to have on repeat play most of the time, but of those twenty four, nine are short between song links, some of which are humourous. I don’t usually like to hear this in an
album and whilst this recording doesn’t actually benefit from them it certainly does no harm to the ages old atmosphere. Stymee’s vocals are raw and untutored but also expressive as well as essential to this musical blend,
with the female harmonies bringing even more atmosphere to the songs, in much the same way as the blend of Travis and Alison Ward’s harmonies do in ‘Hillfolk Noir.’ There are other similarities between the two trio’s, although Crow Quill Night Owls have an added rawness that really is an evocation of the old time string bands.
Whilst this is certainly not a ‘comedy record,’ humour is never too far away from this bands music as evidenced by All Gone Now, a darkly humourous tale with ‘Stymee’s’ lead vocal aided by a slightly discordant female harmony that gives the song even more of an old timey atmosphere, supported by fiddle, banjo, resonator guitar and bass.Sugar Babe I’m Leaving has a nice banjo, resonator guitar, bass and harmonica start before ‘Stymee’s’ raw untutored vocals come in, with the two women on harmonies and the addition of kazoo amongst other things on this old string band song written by Sunny Clapp and Sol Lewis.  On The Road Again is probably the rawest most fiery version of this classic song I’ve ever heard, contrasting nicely with the following, I Used To Call Her Baby, an authentic sounding old Dallas String Band song that blends a vaudevillian atmosphere into the mix! New Lina Blues is a hard driving up tempo song with some unusual sounds and instrumental blends on a tale that has a light hearted early trad jazz feel that harks back to the 1920s, whilst Caveman Blues is a kazoo and harmonica propelled Memphis Jug Band song with a strong female lead vocal, barrel house piano sound and strong bass. The closing song is Wrap Your Troubles In Dreams an album highlight and title track on this old jazz song written by Errol Garner and Lionel Hampton bringing this hugely entertaining album to a natural conclusion.
If you have any feeling for ‘roots’ musical tradition you really should give this band a listen. Whilst they play within the old time tradition they do actually bring an excellent level of originality to not only‘hillbilly’ music but also to the blues, jazz and vaudevillian branches, but always with their own individuality shining through and thus blending these disparate elements into a unique genre of their own making.