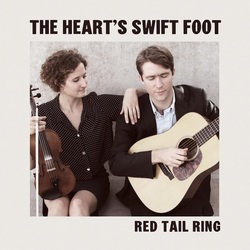 
I often use the word ‘eerie’ to describe music that is haunting, mysterious and sometimes even a little threatening, a pretty accurate description that helps sum up much of this exquisitely played and sung album. The pace is very slow, moody and overflowing with an almost
ethereal beauty, in some ways inhabiting similar territory to Cahalen Morrison and Eli West thanks to the mellow sparse feel, with this pairing also providing an echo that harks back to ‘old timey,’ albeit with a modern sensibility and perhaps more of a sensuality thanks to the blend of male and female vocals. As with the mentioned duo this is not party music but it is an album that gives huge rewards for repeated listening sessions with it’s very much live feel that enables the listener to picture them as if they’re playing in the same room!
Laurel Premo’s wistful at times ethereal vocals are supplemented by her excellent  fiddle, dobro and banjo playing whilst Michael Beauschamps also takes some lead vocals as well as playing guitar and mandolin with the combination also producing exquisite  harmonies. There is a lovely contrast between the two vocalists that gives the album an added sense of drama and character and a powerful old time folk atmosphere. All of the songs were written by Michael Beauschamp and Laurel Premo with the exception of their haunting interpretation of the
traditional St. James Hospital and a beautiful rendition of Hazel Dickens’ My Heart’s Own Love.
First impressions of the atmosphere created by an album are often deceiving, as was the case when I first
played this one. My initial reaction was that this was ‘old timey’ music given a 21st century makeover, but the more I listen the bigger the impression that it’s not really that at all. It is modern day American folk music played with a totally natural ‘old timey’ sensibility that in it’s way creates an incredibly original sound. There are no ‘hillbilly’ affectations, with everything having a totally natural sound on an album that contains not only beautiful songs, excellent playing and tremendous vocals but excellent recording techniques that allow the songs to shine, again as if they are being played in front of the listener
The album opens to the strains of Laurel’s banjo and her gorgeous quite melancholy vocal on Ohio Turnpike,
with Michael adding acoustic guitar and harmony vocals on a song that has a reflective feel rooted in traditional music but updated for the 21st century. This album of mainly slow, moody music get’s it’s variety from the change of vocalists and instruments, despite the paucity, as evidenced by the following song, Katy Came Breezing, that has
Michael on lead vocals and guitar with Laurel adding harmonies and the haunting fiddle that brings a backwoods atmosphere. The title song, the gorgeous The Heart’s Swift Foot, again manages to evoke a strong backwoods atmosphere of indeterminate time with Laurel’s lovely vocal and a gorgeous instrumental blend of mandolin and banjo that pretty much caments the albums style. There is the lovely dobro led ballad of Queen Of The West, And Other Stories that has Michael on lead vocal and guitar with Laurel adding her harmonies and the dobro. The traditional St. James Hospital is quite spine tingling with the two vocalists ensuring this is one of the eeriest versions of the song you are ever likely to hear! Michael provides a melancholic lead vocal on this much recorded old ballad, with Laura’s mournful fiddle deepening the chill atmosphere that intensifies further when they join up on harmony vocals. There are even a couple of excellent instrumentals with J In The Brown Straw consisting of fiddle and banjo, whilst Ladies Choice Waltz is also led by the Laurel’s fiddle, this time accompanied by Michael’s guitar.
This album contains some of the very best of the 21st century’s minimalist and highly original folk music available, at least that I know of, but what provides the originality is the fact that much of it also is strongly evocative of ‘old timey’ music. All this is added to the fact that it is composed, played and sung by a peerless duo who I didn’t think could improve on their previous tremendous album. How wrong can you be!?