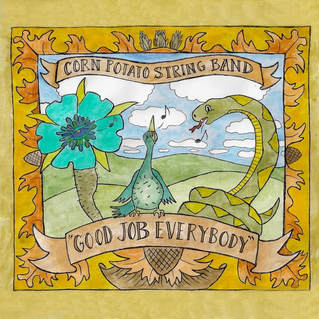 I've read about 'parlour music,' a 'hillbilly' strain that I assumed, in my naivety, to be 'hillbilly front porch' music that was played indoors! I just couldn't see how in such remote areas a handed down rural folk music could segue into a different sub genre; after all hillbilly music is hillbilly music, isn't it? Well, yes and no. As with all labels that are applied to musical genres they only really exist for the purposes of promotion and to help reviewers out of a tight spot particularly if they lack inspiration or perhaps imagination. That is probably a little unfair because trying to describe music in black and white is not that easy. Anyway, I digress. The reason I'm debating the differences in generic strains of what is still in this 21st century a pretty obscure old music is that I think I've cracked the definition of 'parlour music!' I'm on dodgy ground here because I don't really know what I'm talking about; I'm relying instead on my imagination and that tells me this new Corn Potato String band album virtually defines 'parlour music (I hope!) There is an incredible depth of comforting warmth and a powerful 'homeliness' in every song and instrumental on this recording as well as, of course, some virtuosic playing from this hugely talented trio.
The trio is made up of multi instrumentalist Aaron Jonah Lewis on fiddle, banjo and guitar, Lindsay McCaw on fiddle, banjo, guitar, Hawaiian steel guitar and piano and Ben Belcher on banjo and guitar. I've seen the trio twice in a live setting (and as a duo once) as well as having seen Jonah and Ben when they played with the mighty Special Ed & the Short Bus, for the first time at an early Maverick Festival and then again a week or so later. I mention those gigs because each of those performances was as good as you could wish to see and hear in any setting and those settings were certainly varied and although I won't even try to describe them here, believe me they really cried out for musical chops and versatility, something that none of these musicians are found wanting for.
This tremendous album certainly has its roots buried deeply in the old music of the Appalachians and if they had possessed the recording technology, probably much further back in time to the days of the early settlers. That is music that  was played at various locations and for various purposes such as front porch, parlour, hoe down and in church over the century or more before recording was possible, in fact whilst there was perhaps less sophistication in its construction, pretty much the same purposes as we use it nowadays.
Most of the thirteen songs on this recording are 'public domain' although a few do possess song writing credits and one instrumental, Corn Potato stomp, is a Jonah original. As I've already said this is an album that possesses such an incredible degree of warmth and homeliness, with some nice little humorous touches to add to the light entertaining comfort of the songs and tunes. Whilst there are no examples that I know of to go on this album is undoubtedly one that could almost define 'authentic parlour music,' creating its own wrap around atmosphere as we progress through these tremendous performances. Whoever handles the vocals, there is an unselfconscious, untutored feel to proceedings that emphasizes that this is a trio of musicians who are genuinely having a great time playing music they love with people they love working with.
Ten songs have vocals; some with Jonah on lead, others with Lindsay and on occasions some excellent duets, in particular songs such as There's a rainbow in every teardrop, with some nice yodeling from Jonah and beautiful steel guitar and banjo from Lindsay and Ben respectively. Many of the melodies will be recognizable as originating in the British Isles or at least adapted from, such as Helena polka and old songs such as Rubber Dolly and I let the stars get in my eyes. In many cases these are songs whose authorship is unknown and unknowable with bits and pieces of lyrics and melodies being begged, borrowed or stolen from songs that no longer exist or if they do have undergone such changes as to make them unrecognizable.
Such is the nature of folk music, which when you analyze it pretty much covers all musical forms from classical to avant garde and rock and if some of what is written above is allowing my imagination to take liberties with an unwritten and unrecorded history, again, the nature of the beast. What I do know for absolute certainty is that this incredible album is the best you will hear in its genre (whichever that may be) and will certainly be one of my albums of the year. To call it a historical document undersells it but that is certainly a part of the makeup of this recording of incredible warmth, versatility and quality.