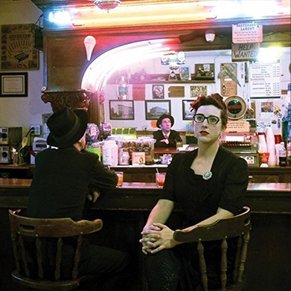 At least in terms of music, the late 20th and early 21st centuries have been, and continue to be, very kind to someone with my tastes. A huge amount of the old time 'hillbilly' music from the early days of recording is now available and there seem to be more and more excellent bands playing in those old styles as well as developing and modernizing that thread that goes way back in time to before it was possible to record music. The off shoots into genres such as Western Swing, Country and Western, country pop, country rock and many other sub genres too numerous to mention here have always been there but my main preference is for the music that comes in a pretty much direct line from those long gone originators, what I always refer to as the truly traditional real country music, or words to that effect!
This is Nikki Grossman and Joe Hart's, otherwise known as the Yellow Bellied Sapsuckers, third recording and follows on from 2015s brilliant self released 'Ocooch Mountain Home.' That in turn followed their debut, an album I have yet to hear, quite likely in style as well as similarity in content, containing in the main a collection of incredibly skillful and heartfelt versions of 'old time' songs. They themselves describe their music as 'A brand new take on old-time country,' a completely accurate description, certainly on Ocooch Mountain Home, but perhaps less so on this tremendous new recording, unless somewhere in that sentence they include words to the effect of 'more expansive,' because this album certainly is. There are still 'old timey' songs but they seem to have expanded their music into other areas of country music whilst still retaining their purity (musically at least!). Whilst none of these, all original, songs stick rigidly to a certain style there are detectable (and delectable) flavours of western swing and 'redneck' country, as well as a tasty mixture of other styles all performed with their 'down home' old time originality.
All of the twelve songs were written by Nikki Grossman and Joe Hart, except for Road to Outlaw Bridge on which the words were by Nikki Grossman and Milon Peterson. The album was recorded in Minneapolis by Tom Herbers who has also recorded artists such as Trampled by Turtles, Charlie Parr and Low, at Creation Audio, with co producer, the legendary UK producer John Wood.  Their instrumentation is now more expansive although they do still retain an often sparse sound with Nikki Grossman on vocals, guitar, fiddle and  kazoo, Joe Hart is also on vocals as well as guitar and mandolin; Liz Draper on bass, Chris Hepola, drums, piano and percussion, Toni Lindgren played electric guitar, Patrick Harison,  accordion, lapsteel and washboard, Randy Broughton on pedal steel, Adam Kiesling on banjo, Mary Hart, piano, Gerard Ahlgren played trumpet and last but not least Cory  Grossman was on percussion and whistling! This is certainly a hugely talented line up and one that never tries to overwhelm the songs, always leaving enough space to create a decades old feel irrespective of the age of any of their stylistic variants.
The album opens with a fiddle that is soon joined by Joe's easy going vocal with banjo then coming in, soon abetted by Nikki's evocative harmonies on the chorus of Borrowed time. It is a song that rolls along at a gentle mid pace but with a natural edginess that ensures the song takes on a nice depth. A gentle guitar and steel guitar with tinkling piano gets Fools were made to be broken, a gentle duet ballad, off to a lovely melodic start that leads into the excellent vocal performance by both on a classic and beautiful country ballad that evokes some of the great duets of the past A sawing fiddle creates the feel of an old parlour ballad on The flower girl, with Joe's vocal and the gentle bass and percussion enhancing that feeling on an excellent song that could as easily be from a hundred years ago as now. It actually reminded me of a song that would have been performed by the modern day band 'The Corn Potato String Band' in their very best 'old timey' mood. It is easy to imagine the song having been written 150 years ago a the writer of old classics such as Stephen Foster! It's lovely at the bottom is another excellent duet, this one evoking Gram and Emmylou. Whilst it is a beautiful and excellent song it always has a distinct edginess, with a complete lack of sanitization that gives the song and indeed the whole album huge appeal. The arrangement is excellent with the percussion and bass laying some firm foundations, with melodic guitar and fiddle filling the spaces in all the right places.
I love the Sapsuckers music! In fact, everyone should love it because, certainly on this excellent album, there is something for everyone wherever their tastes lie, albeit within the broad boundaries of 'country music' and its varied offshoots. For the traditionalists like me, they evoke those old days of nearly a hundred years ago and now have added several more strings to their bow with beautiful country duets and just about everything in between. Some of their songs have a heavy, hugely evocative rural atmosphere; others are light, airy and uplifting, even occasionally veering towards country rock, as in the case of Nashville hero. What more could any music fan wish for? Perhaps more albums of this quality would be a great starting point and we just know that is what we'll get in the future from the gifted Yellow Bellied Sapsuckers!