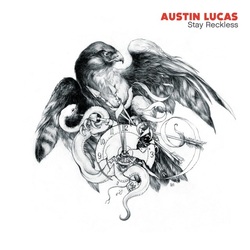 
This is one of those albums that should perhaps be described as ‘country music as it should be played.’ Austin Lucas’ vocals have always had a distinct country twang, albeit with plenty of soul, similarly his songwriting and instrumentation and yet there is also at times a strong ‘rock sensibility.’Maybe that is more evident because the man seems to write naturally without any of the those unnatural affectations that so many others presume we, the music fan, wants. Austin is much travelled and steeped in genres that range from punk to folk and latterly country, it is easy to see and hear that he arrives at country music quite naturally although there is always the impression that his ‘punk side’ is never far away, giving him an edginess, even on some of his mellow ballads. He still spends time playing with ‘Guided Cradle,’ a band I’ve seen described as ‘heavy metal punk’ and even this probably underplays the hardness and malevolence of their music. Look them up on youtube after listening to this tremendous album and you will see the musical extremes that make Austin the talent that he is.
He is ideally suited to just about any off shoot of roots music with his intense vocals  and highly literate writing style. Born into a musical family, (his father is well known producer/songwriter Bob Lucas) he is a classically trained vocalist who actually sang opera in a childrens choir, something that explains his wide vocal
range. Link this to his punk rock background and you go further towards explaining his unique style and musical ‘edginess,’although at times it is difficult to ally his vocals to that punk background thanks to the sheer quality
and range inherent in his voice
On this, his fifth solo album he is helped out by old friends and hugely talented alt. country rockers ‘Glossary’ as well as well as Todd Beene of ‘Lucero,’ with Austin combining with ‘kindred spirit’ Mark Nevers as co-producers.
The songs are all Austin originals and whilst they have strong elements of sadness following his divorce they also include an acceptance of the way his life is working out if not always huge pleasure therein, unless of course he is performing! The album opens with Let Me In, a very good speedy rocker, driven by guitars and his twanging country vocal on some snippets of thoughts and emotions about his marriage and subsequent divorce and the personal confusion that feeds those emotions. A cleverly written song that you might expect to be a slow ballad but in many ways has more impact because it’s not! Next up is a ballad and what a gorgeous song it is too.  Alone In Memphis includes a lovely steel guitar on a tale that has a tension to it that few others can manage. It tells the story of a musician missing home, disliking the life he has to live but ultimately he is feeding his addiction to performing. Small Town Heart is a speedy country rock ballad that starts slowly and then takes off with a meaty guitar sound on the effects of life in a small town and again tells of someone who has come to terms with where he’s from and where he is, metaphorically as well as logistically! This is followed by Rings a beautiful slow moody ballad with gorgeous haunting steel guitar and Kelly Kneiser’s lovely harmonies on the sad story of someone’s acceptance that his  life makes him unsuitable for marriage despite his depth of feeling. There is a nice flowing fiddle and steel guitar on Different Shades Of Red, a powerfully edgy country song tribute to the ‘Baby Boomers,’ as well as the hard driving
punked up country of So Much More Than Lonely that in some way explains the experiences that enable the writing of sad country songs, a dominate feature of this tremendous album.
Every time I play the album there seems to be a new revelation. I know this should happen with all albums and with many quality recordings it does, but rarely after the countless number of listening sessions I’ve had with these edgy tales. It would be tragic if all music fans weren’t exposed to music of this quality and originality. Great  album!